179km of railway was electrified in 2020-21 instead of the 448km needed to meet decarbonisation targets. 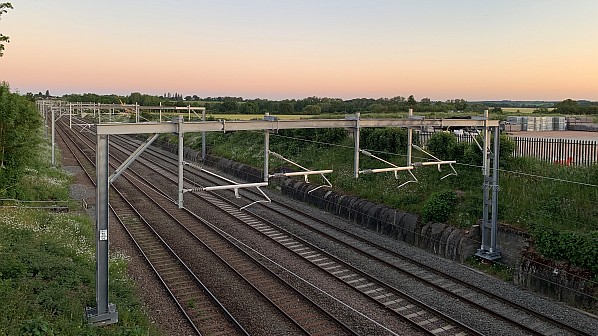 BRITAIN’s current rate of electrification is less than half of what is required to decarbonise the rail system by 2050 according to figures released by the country’s regulator, the Office of Rail and Road (ORR) on October 14.

In 2020-21, 179 track-km was electrified, less than half the 448km required each year to meet infrastructure owner Network Rail’s target of a Net Zero railway by 2050.

Currently, 6045 route-km of Britain’s mainline network is electrified, with 9890 route-km not electrified. The most recent addition is the electrification of the Midland Main Line (MML) between Bedford and Corby, which was energised in July 2020.

“According to Network Rail’s Decarbonisation Strategy, we need to deliver 13,000 kilometres of electrification by 2050,” says Mr David Clarke, technical director at the Railway Industry Association (RIA) and author of the Electrification Cost Challenge Report published in 2019. “What’s more, with no major schemes coming down the line, we can reasonably expect that there will be less work, not more, in the coming year.”

RIA has long called for a sustainable, cost-effective programme of electrification alongside support for alternative power including batteries and hydrogen. Clarke said this was endorsed by the British government’s Transport Decarbonisation Plan in July 2021. “Yet, at the current rate, we are unlikely to meet that target,” he says. “Crucially, the industry is also losing expertise and capabilities whilst schemes are stalled, meaning it will be harder to deliver the considerable amount of work needed if and when new projects are started.”

A programme of electrification work needs to get underway today, says Clarke, which would allow Britain to decarbonise its rail network, bring benefits to passengers and freight users and support the British economy.

The latest figures were published on October 14, the day after it was revealed that rail freight operators had stopped using electric locomotives on a “temporary basis” due to a sudden rise in electricity charges.

When the Traction Decarbonisation Plan was published on July 14, the British government stated it would publish a pipeline of rail electrification schemes “soon” as part of its commitment to decarbonise Britain’s transport network. No routes were mentioned, and three months later there has still been no announcement regarding such schemes.