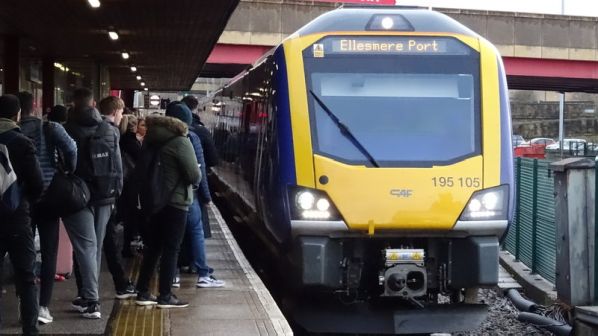 There had been hopes that the Northern Powerhouse Rail project would lead to Bradford being better rail-connected than at present. Here is a train at the city's Interchange station.
Photo Credit: J Thomas / Bradford Interchange Station / CC BY-SA 2.0 / Wikipedia Commons

The original Northern Powerhouse Rail (NPR) project included a new high-speed line through the Pennines between Manchester and Leeds via a new station at Bradford.

The project also envisaged a link to the new HS2 high-speed line originally planned to link London with northern England, and to Manchester’s important international airport. It also included a network of connecting lines to Liverpool, Sheffield, Hull and Newcastle to provide better connections between the region’s population centres with the aim of attracting investment and stimulating economic growth.

However, the Integrated Rail Plan released last November by the government of then prime minister, Mr Boris Johnson, scrapped plans for both the eastern leg of HS2 to Leeds, instead ending it further south at Birmingham, and watered down the NPR element to a £96bn upgrade of the existing Transpennine route.

But when Johnson’s immediate successor, Ms Liz Truss, was campaigning to take his place as prime minister, she pledged to restore the HS2 and NPR projects in their entirety, once again raising the hopes of city mayors and business leaders in the north of England.

Now, with the arrival of Sunak as prime minister, NPR has again been downgraded and the Integrated Rail Plan has been reinstated as Sunak and the chancellor, Mr Jeremy Hunt, work to fill an estimated £50bn black hole in the government’s finances.

Comments made by former transport secretary and current business secretary, Mr Grant Shapps, to BBC News have aggravated northern business and city leaders, who criticised the latest reversal as a failure to “level up” economic conditions in northern England as promised.

"The [existing] line itself can deliver a 33-minute journey from Manchester to Leeds, quadruple nearly the capacity of that line, and do so without having to wait an extra 20 years beyond the delivery of what the upgrade can do,” Shapps said of the approach being adopted under the Integrated Rail Plan.

“There wasn't really much point in going and blasting new tunnels through the Pennines.”

“If the government decides to stick by the Integrated Rail Plan, refusing to deliver a new line across the Pennines as far as Leeds and cutting off Bradford altogether, this will be a serious setback for levelling up,” says Northern Powerhouse Partnership chief executive, Mr Henri Murison. “It raises serious questions about their plans for growth, given that the north’s woeful transport infrastructure continues to weigh down our economy and hold back private investment.”

There has been much recent criticism of rail services in northern England as operators TransPennine Express and Avanti West Coast have regularly cancelled trains in recent months due to staff shortages, some caused by the refusal of drivers to work overtime as rail unions take industrial action over pay.