The system will be used during testing of a Siemens Mobility’s Mireo H hydrogen-powered train on regional lines in 2024. 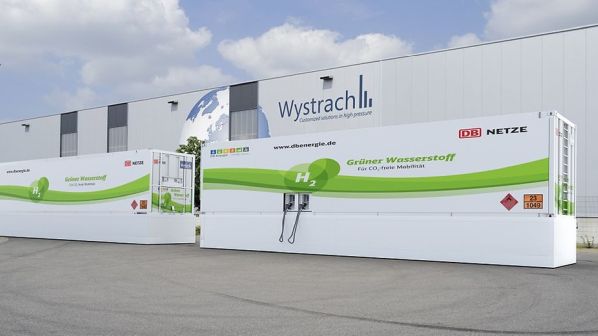 The refuelling system will be mobile.
Photo Credit: DB

DB Energy, a subsidiary of German Rail (DB), has announced it will begin testing its first rapid hydrogen refuelling station next week ahead of installation in the autumn and eventual entry into service in summer 2022.

The new type of rapid refuelling technology will be analysed in a laboratory environment, with tests over several weeks laying the foundation for initial approval and construction. The station is designed to refuel hydrogen trains within 15 minutes, comparable with refuelling times for diesel trains.

The project, which is being developed under DB’s H2goesRail programme, has been supported by Wenger Engineering, Ulm, and Wystrach, from Weeze on the Lower Rhine. Under the H2goesRail programme a one-year trial hydrogen service will operate between Tübingen, Horb am Neckar and Pforzheim in 2024.

The refuelling station is part of a wider platform that includes a commuter train being designed by Siemens Mobility, and a maintenance facility developed by DB Regio, which is specifically designed for hydrogen trains.

The hydrogen, which will be climate neutral, will be produced onsite through electrolysis using green electricity. It will then be cooled and compressed, before being pumped into the trains.

“Hydrogen generated with green electricity as an alternative to diesel will pave the way for climate neutrality,” says DB Energy CEO, Mr Torsten Schein. “Green hydrogen can become a success in rail transport if fast, reliable and competitive refuelling times comparable to conventional diesel systems can be achieved. This refuelling station infrastructure is of crucial importance: it is an innovation and will set standards.”

DB CEO, Dr Richard Lutz, announced last month that the railway plans to become carbon neutral by 2040, accelerating delivery of its current plan for its rail and logistics operations by 10 years.