Testing with an electric locomotive to start by the spring. 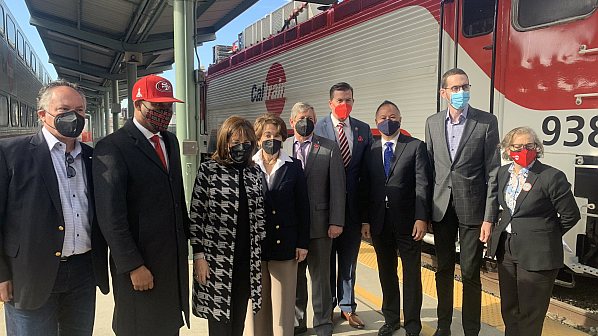 THE 82km Caltrain electrification project passed a significant milestone on January 28 with the completion of the final foundation for the new 25kV ac overhead catenary system.

Caltrain began construction on the project, between San Francisco and San Jose Tamien station, in 2017, and 3092 foundations have been completed.

This is the first of what are expected to be several milestones this year. Caltrain says that the southern section will be energised and that an AEM7 electric locomotive will begin testing this spring. By the summer, the entire line will be energised.

The first Stadler Kiss double-deck EMU is due to arrive on the line in the spring having spent the past 10 months testing at speeds up to 185km/h at the Transportation Technology Centre test track in Pueblo, Colorado.

Electric services are expected to commence in 2024, two years later than planned. This is due to complications in the installation of signalling systems, unforeseen conditions under Caltrain’s tracks and the Covid-19 pandemic, which severely disrupted supply chains. The delay was announced on June 3 last year. On December 6, the project’s cost rose to $US 2.44bn, making it $US 462m over the initial project estimate. Caltrain has so far received an additional $US 52.4m from the federal government, has accessed a $US 150m financing credit and received $US 60m in Measure RR capital reserve to help close the funding gap.

For data on North American projects, subscribe to IRJ Pro.