The breakthrough took place between the Göstritz and Fröschnitzgraben sections. 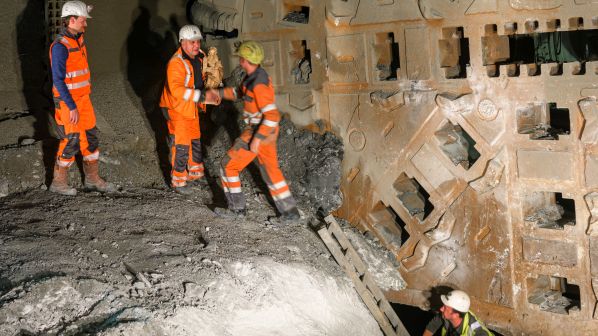 THE first breakthrough in the 27.3km dual-bore Semmering Base Tunnel connecting Gloggnitz with Mürzzuschlag was achieved on June 10.

Workers excavating the first 1578m-long bore on the Göstritz section connected with the Fröschnitzgraben section, where the “Carl” tunnel boring machine (TBM) is currently being dismantled and removed. Less than 400m remains in the second bore towards the Fröschnitzgraben section, while around 300m remains in the opposite direction from Göstritz towards Gloggnitz.

Austrian Federal Railways (ÖBB) announced in April that completion of the tunnel is now expected in 2030, as special measures adopted to tackle complex geological conditions in the Grassberg area have not proved as successful as hoped when they were implemented in 2021. The estimated total cost of the project has also increased by €390m to €3.9bn.

Work on the Gloggnitz section has resumed after the introduction of special measures to deal with the extremely difficult geology in this section, but around 900m remains to be excavated.

More than 24km of the tunnel has been dug, with five of the 14 drives now completed, including four in Fröschnitzgraben section and the Göstritz drive.

Work to line the tunnels with the inner shell began in 2020, with 7km completed so far. Fitting of the rail equipment including track, signalling and electrification will begin following the completion of the inner shell.

“Congratulations to the contractors and especially to the miners,” says ÖBB project manager, Mr Gerhard Gobiet. “About seven years after work began in the Gloggnitz section, a first major milestone has been reached on the way to completing the Semmering Base Tunnel. This is a very special moment for all of us involved in the construction. The first connection of two sections has been made and more than 24km of the tunnel have been completed. It is a day of joy, but a lot of hard work still lies ahead.”