Part of project to restore cross-border route to Pau in France. 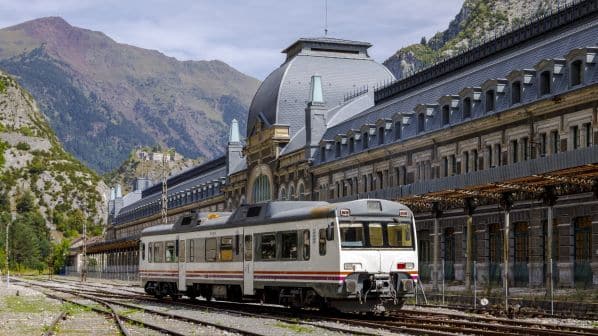 SPANISH infrastructure manager Adif has awarded a joint venture of Meta Engineering and Subterra Ingeniería a contract to undertake project design to install 1435mm gauge on the 1668mm-gauge route running for 138km from Huesca to Canfranc.

The contract is worth €847,000. Work is to be completed within 10 months, which would then allow tenders to be called for the installation of 1435mm gauge track.

Providing standard gauge forms part of the project to reopen the 310km route from Zaragoza in Spain via Canfranc and the Somport Tunnel to Pau in France, which has been closed on the French side since a bridge near Bedous was demolished by a runaway freight train in 1970.

Dual 1435mm and 1668mm gauge is already in place between Zaragoza and Huesca.

The reopening project is being taken forward under an agreement signed by the two national governments, as well as the regions of Nouvelle-Aquitaine in France and Aragón in Spain.

It is hoped to develop the Zaragoza - Pau route as a freight corridor connecting major logistics hubs, and the section between Huesca and Canfranc will be resignalled with ERTMS to ensure interoperability on the cross-border line.

The upgrade of the Huesca - Canfranc section will also include widening the loading gauge, building 450m passing loops at stations and improvements to level crossings, tunnels and bridges. The route is to be electrified and telecommunications systems upgraded.

Between Zaragoza and Huesca, Adif reports that the first phase of formation works has been completed at Zuera.