The repairs in Germany are expected to cost more than €2bn. 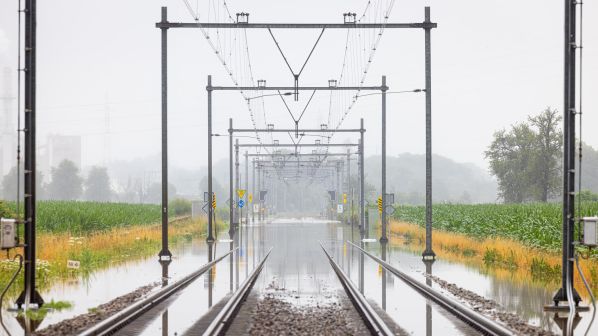 Lines in the Netherlands were blocked by floodwaters.
Photo Credit: ProRail

INFRASTRUCTURE managers in Belgium, Germany and the Netherlands are assessing the reconstruction task following the severe flooding that affected the countries in mid-July.

While all affected routes are expected to reopen in Belgium by September, some in Germany may not reopen for months or years as they will need to be completely rebuilt.

In Germany, DB Networks has announced multiple lines will be closed for the medium to long term with the most damaged route in the Ahr Valley between Remagen and Ahrbrück likely to be out of use for several years. 24km of the 29km line has been destroyed and all six bridges over the river Ahr have been washed away or damaged beyond repair.

DB Networks reports the floods have damaged more than 600km of track and 80 stations in total as well as lineside equipment and signalling. In some cases, trains were submerged in floodwater. Immediate temporary repairs have reopened some routes although more substantive renovation will be required at some sites in the long term.

Repair work is expected to cost more than €2bn, with €1.3bn for track reconstruction and around €500m for station rebuilding. This work could last until 2025, federal transport minister, Mr Andreas Scheuer, told the German Parliament’s Transport Committee on July 22. Scheuer revealed that parts of the badly damaged (Cologne) - Euskirchen - Trier Eifel Railway line have yet to be reached by engineers and have only been surveyed by drones, with the worst affected sections “pulverised” by the flood water, according to the minister.

In addition to the Ahr Valley line, a further seven lines in northwest Germany will be closed for several months while repairs are undertaken. This includes three non-electrified regional routes in the Eifel region south of Cologne:

West of Cologne, repairs to the Herzogenrath - Geilenkirchen section of the Aachen - Mönchengladbach electrified line are forecast to take multiple weeks or longer.

Three routes, including two intensively used lines in the east of the Ruhr region around Hagen, will also be closed for weeks or months whilst repair work is undertaken:

The major freight yard at Hagen-Vorhalle was also closed due to flood damage, but reopened a week later along with the Cologne - Wuppertal - Hagen main line used by long-distance passenger and freight services. Line closures and the lack of yard facilities is reportedly currently affecting the steel industry across the Ruhr region with shortages of raw materials and manufacturers unable to despatch finished product by rail.

Two routes remain closed in the Bavarian Alps after they were also damaged by floods as the weather system moved east:

Elsewhere in eastern Germany, flood damage in the Elbe Valley south of Dresden has reduced capacity as only one of the two tracks on the Dresden - Děčín (Czech Republic) main line is operational, restricting both passenger and freight services.

Belgian lines to be restored by September

Infrabel says damage to both main lines connecting Brussels with Luxembourg, via Dinant or Arlon, will not be repaired until August 9, leading to disruption, diversion and cancellation of freight between the Belgian ports, especially Antwerp, and southern Europe.

Elsewhere, Infrabel expects to have repaired and reopened all flood damaged lines by August 2 except for those worst affected south of Liège around Verviers. The Liège-Guillemins - Verviers main line and Pepinster - Spa branch lines are not expected to reopen before August 30. Some trains that use the route, such as those between Brussels and Welkenraedt/Eupen, are being diverted via an alternative freight line through Montzen.

Diversions in both Germany and Belgium away from damaged routes and those that continue to be at risk of the exceptionally high water levels in major rivers, especially the Rhine north of Koblenz, are continuing. However, this is expected to be reduced over the next two weeks as routes are repaired and water levels recede.

The Netherlands looks to rebuild

ProRail has initially estimated that repairs to its network could cost more than €500,000, although it is waiting for the water level to recede to examine culverts and underpasses in Limburg. ProRail says that the flooding may have weakened some structures or cause some wires to corrode faster, causing long-term issues.

However, the infrastructure manager says it is looking at ways it can repair the railway in a climate-friendly manner, such as by adapting the drainage ditches.