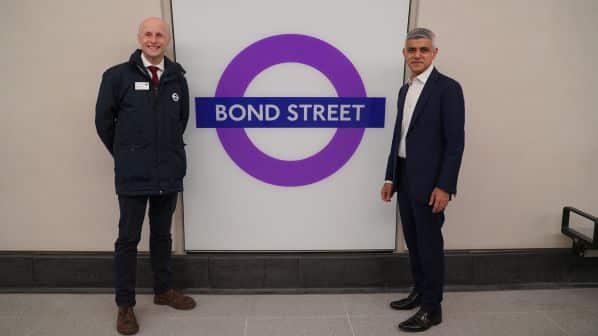 Services on the 21km central section of the Elizabeth Line between Paddington and Abbey Wood in the southeast began operating on May 24 but work was still underway at that stage on completing Bond Street station, the last of the central section’s 10 stations to open.

The first scheduled train to stop at the new station arrived at 05.47 on October 24, with London’s Transport Commissioner, Mr Andy Byford, London mayor, Mr Sadiq Khan, and under-secretary of state at the Department for Transport, Ms Katherine Fletcher, welcoming some of the first passengers at the new station. Visitors were also treated to a live performance by West End stage star Rosie Graham of a song from the National Theatre musical Sleeping Beauty.

Trains are now serving Bond Street every five minutes, increasing to every three to four minutes at peak times from November 6 - the day that Elizbeth Line services from Reading and Heathrow Airport in the west will run through the central section to Shenfield in the east.

The new station has step-free access from the street to the train with two lifts to street level. It also provides an interchange between the Elizabeth Line and the London Underground Central and Jubilee lines. The station will accommodate nearly 140,000 Elizabeth Line passenger journeys daily.

The new station, as well as sharing a consistent look and feel on the platforms and cross-passage areas with the other Elizabeth Line stations in central London, also has above-ground areas inspired by the historic buildings, art galleries and vibrant retail scene of the West End.

British artist, Mr Darren Almond, has created three abstract artworks for the spaces above and around the new Bond Street station western ticket hall escalators. In form and style, two of these resemble large-scale adaptations of the metal nameplates that used to be attached to British steam locomotives. Each work is made by the same heritage sign company that makes boiler plates for locomotives. The artworks have been sponsored by the department store Selfridges and the City of London Corporation.

For more about metro projects around the world, subscribe to IRJ Pro.