Decision not to replace a flyover like-for-like saves time and money on British rail reopening project. 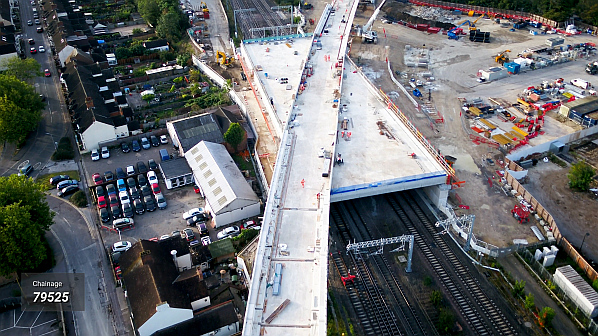 ENGINEERS have saved £70m and six months of construction time on the East West Rail (EWR) reopening scheme in Britain by implementing a different method for the removal and replacement of a flyover which crosses the West Coast Main Line (WCML) at Bletchley.

British infrastructure manager Network Rail (NR) and the East West Rail Alliance are restoring the Oxford - Cambridge line in three stages, which includes the replacement of the structure over the WCML. The flyover is located on the first stage of the reopening, the section from Oxford to Bletchley and Milton Keynes.

Instead of replacing the old flyover like-for-like which would have required the closure of the WCML to build five supporting columns between the tracks, engineers built a protective ‘box structure’ which acted like a rectangular railway tunnel and removed the need for separate supporting columns. This provided a platform for the flyover to sit on. The structure uses 138 concrete shell abutments and 103 40-tonne precast concrete beams. Waste material from the dismantled spans and piers has been recycled elsewhere along the EWR route.

Mr Mark Cuzner, East West Rail Alliance project director, says at the start of the project a protective wall was built next to the WCML enabling engineers to build the box during the day instead of working piecemeal at night. 70% of the components for both the box and the flyover arrived pre-built and were assembled on site. This method allowed a 60% reduction in onsite workforce, cutting the previously-forecast cost by £70m and completing the work six months ahead of schedule.

Demolition of the previous structure, which dates from the 1960s, took place throughout 2020.

Track and signalling will start to be installed on the flyover over the coming months.

For detailed data on infrastructure projects across Europe, subscribe to IRJ Pro.