The new station will be built across three storeys. 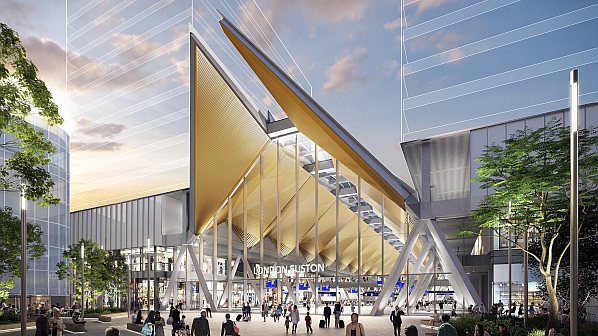 HS2 Ltd has revealed an updated design for its new high-speed terminal at London Euston, which Phase One trains are due to serve between 2029 and 2033.

HS2 Ltd says the new design is less complex and more efficient. It says construction of the station can now take place in a single stage rather than the two stages previously planned. HS2 Ltd says the design has considered recommendations from the Oakervee Review published in February 2020 by integrating the existing Network Rail (NR) terminus at Euston into the plans. NR is creating plans to redevelop and integrate its station alongside the HS2 terminus.

The high-speed station will be on three levels, with 10 450m-long subsurface platforms which at peak operation will be used by 17 high-speed trains per hour. The ground level concourse will be 300m-long and will open onto public spaces at both ends of the station. The station hall will be the largest station concourse in Britain. Station and retail facilities will be on both the ground and first floors.

There are plans for seamless connections to the Hammersmith & City and Metropolitan Lines operated by London Underground (LU) that serve the Euston Square LU station, as well as the existing Northern and Victoria LU lines at Euston.

The station will feature a bold geometric roof designed to allow natural light to enter the station concourse. HS2 Ltd says the roof is an identifying feature of the station and emphasis the north-south alignment of the route. Elements of the roof can be prefabricated off site and installed using modular construction techniques designed to reduce costs and carbon emissions.

The new design has been created by a consortium including Arup, WSP and Grimshaw Architects working with HS2 Ltd’s station construction partner Mace Dragados JV (MDJV). Construction will be carried out by MDJV.

HS2 minister Mr Andrew Stephenson says the new station will benefit the local community by enabling a comprehensive redevelopment of the area and the creation of a transport super hub.