A new €35m workshop was inaugurated by Rhine-Ruhr Transport Authority (VRR) and Stadler on November 13 to maintain trains operating on behalf of VRR. 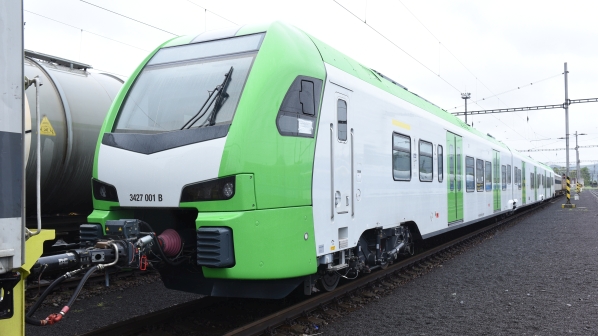 This includes the 41 trains Stadler is supplying for the Rhine-Rhur S-Bahn and regional services, which will be maintained under a 32-year contract.

Stadler built the new workshops over 18 months on a former coal mine area, called Zeche General Blumenthal, near Herne in the Ruhr. More than 4000m of rails and 2700m of overhead catenary were constructed on the site, which has six tracks. The new facility also has train washing equipment and a wheel-lathe, and will undertake both corrective and preventive maintenance. Seven Stadler- Flirt trains can be serviced per day.

VRR awarded Abellio a contract in July 2016 for the operation of 7.1 million train-km per year on lines S2 (Dortmund - Recklingshausen/Essen/Duisburg), S3 (Oberhausen - Essen - Hattingen), RB3 (Dortmund - Gelsenkirchen - Duisburg), RB40 (Essen - Bochum - Hagen) and RB41 (Essen - Wuppertal). Abellio announced in October that it has subcontracted DB Regio to operate Line S3 between December 15 and March 1 2020, due to a shortage of train drivers.

The interior of the trains have a symmetrical design to make it easier for passenger to orientate themselves. This means some facilities, such as wheelchair spaces, will always be in the same position regardless of which direction the train is travelling. The trains have a visual and audio passenger information system to provide information on disruptions and delays. Most of the seats are arranged in a face-to-face arrangement, and the trains are equipped with CCTV and Wi-Fi.