AN ICE-S measuring train on loan to AlpTransit Gottard has reached 275km/h in the new 15.4km Ceneri Base Tunnel under the Swiss Alps. 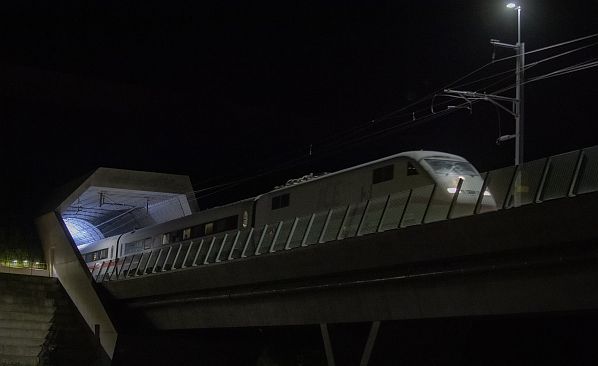 An ICE-S measuring train on loan from Germany has reached 275km/h during testing in the Ceneri base tunnel under the Swiss Alps.

However, testing was interrupted in mid-March due to the coronavirus pandemic. AlpTransit was allowed to resume testing on April 20 in strict compliance with the requirements of the Federal Office of Public Health (BAG).

On April 29 high-altitude test running started using the ICE-S high-speed measuring train leased from Germany. During these high-speed runs, the speed was gradually increased and the first test run at the maximum speed of 275km/h took place during the night of April 30-May 1.

Numerous test runs are planned in the tunnel between Camorino and Vezia until the handover of the Ceneri base tunnel to SBB on September 1.

Construction of the base tunnel began in 2006 and it is the final section of the Zürich - Milan corridor upgrade project, which also included the Gotthard Base Tunnel. Opening of the Ceneri Base Tunnel will cut journey times between the two cities to less than three hours.