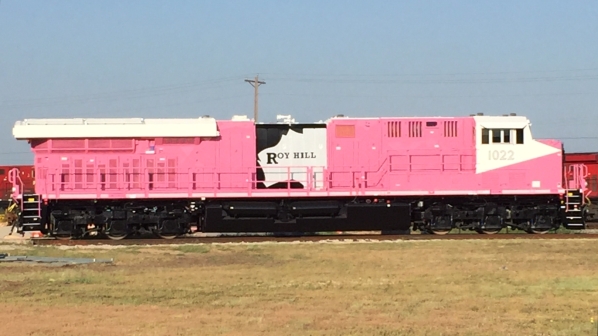 The locomotives have been painted pink in honour of Roy Hill chairman, Mrs Gina Rinehart’s, commitment to support patients and research into breast cancer.

Rinehart christened one of the locomotives “For Mothers,” while prominent Australian genetic researcher, Dr Patricia Kailis, christened the other “Women of the North.”

GE is supplying 21 of the six-axle 3.28MW ES44Aci Evolution Series locomotives for the 344km single-track line, which carries 55mtpa of processed iron-ore from the new Roy Hill mine to a dedicated port facility located south of Port Hedland. The Roy Hill railway operates five trains per day, each formed of three locomotives and 232 wagons and with a payload of 32,109 tonnes of ore.

GE says it was excited to support Roy Hill’s request to paint the new locomotives pink.

“This marked the first time GE has painted a locomotive pink and we are proud to support such an important cause,” says Mr Nalin Jain, president and CEO, International at GE Transportation. “These locomotives will serve Roy Hill well both in hauling millions of tons of ore and demonstrating their commitment to breast cancer prevention, diagnosis, treatment and survivorship.”

“These cars, when attached to one of our new GE pink locomotives will create a striking image as they forge their way across the Pilbara region,” Rinehart says.