GE to supply 50 locomotives to Indonesia

INDONESIAN Railways (PT KAI) has placed an order with GE for 50 additional class CC206 diesel locomotives, which will be used on passenger and freight services on the 1067mm-gauge networks in Java and Sumatra. 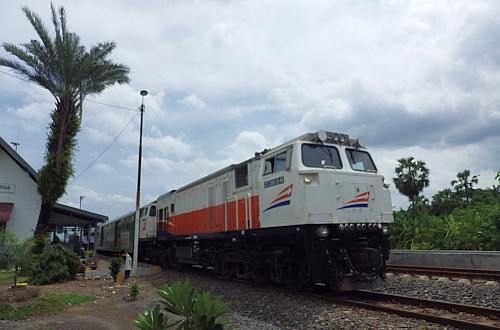 The 1.67MW six-axle locomotives (GE model CM20-EMP) are being ordered at a unit cost of $US 2.5-3m as part of PT KAI's 2014 procurement programme. The first 15 locomotives will be delivered by September 2015 and a second batch of 15 units will arrive in Indonesia the following month. All 30 of these units are destined for Java, where they will be used on passenger and freight trains.

The remaining 10 locomotives will be delivered in September 2016 for freight operations in South Sumatra.

Since 2012 GE has supplied 100 CC206s to PT KAI. The locomotives were assembled at GE's Erie plant in the United States with the exception of the bogies, which were produced in Indonesia by PT Barata.