Trains form second phase of an order first placed in 2014. 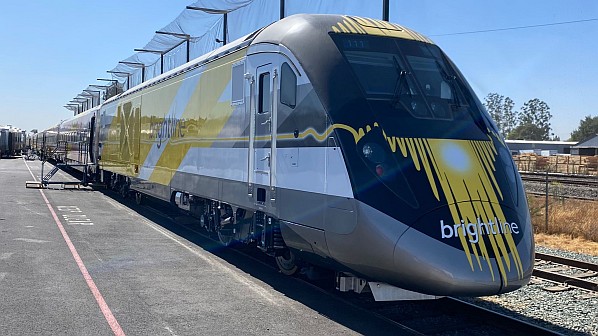 The first of five new trains for Brightline.

SIEMENS unveiled the first of five additional trains for United States inter-city operator Brightline at its Sacramento factory in California on September 28.

These are the second phase of an order first placed by Brightline with Siemens in 2014. Five push-pull trains, each formed of four coaches with a 3000kW Charger SBC-40 diesel-electric locomotive at each end will be delivered ready for the opening of the 273.6km Phase 2 extension from West Palm Beach - Orlando line next year. One additional spare Charger locomotive will also be delivered.

Brightline says it was always the intention that more trains would be ordered for the new line,

The trains are equipped with free onboard Wi-Fi, power sockets and USB chargers, and are fully accessible. Interiors are designed by the Rockwell Group

Mr Mike Reininger, Brightline Trains CEO told IRJ that once testing and commissioning is complete, the new trains will provide additional flexibility on the existing 105km Miami Central - West Palm Beach line. Not all the new trains will be sent to the eastern coast of Florida with Reininger confirming that the final sets will be delivered to a new $US 100m vehicle maintenance facility under construction on a 62-acre site south of Orlando airport. The final trains are due for delivery in summer 2022.

Brightline operations in Florida were suspended in March 2020 following the outbreak of Covid-19 but are due to resume in November. Reininger did not confirm an exact date for the start of operations on the Miami Central - West Palm Beach line.