THE Victorian state government will allocate $A 2.2bn ($US 1.6bn) in the state budget for early preparatory work on the ambitious 90km, $A 50bn Melbourne suburban rail loop. 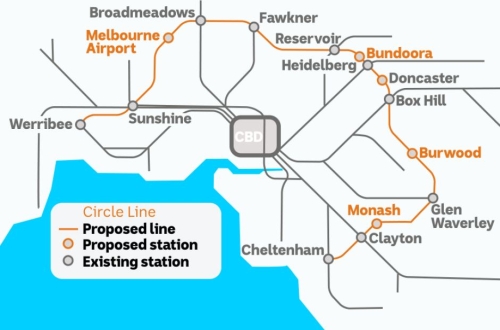 The new loop will include up to 12 new stations, with stage one including new underground stops in Cheltenham, Clayton, Glen Waverley, Burwood and Box Hill.

New stations will also be built at Monash and Deakin universities while a new station at Clayton will serve as an interchange with regional V/Line and Cranbourne - Pakenham commuter services.

300 homeowners have already begun receiving notice that their properties will be impacted by the project and may be compulsorily purchased to make way for the new line.

Early work will start in 2022 and will involve relocating gas, water and other utilities, upgrading power facilities and roads, and developing launch sites for tunnel-boring machines. The work will also involve the purchase of land and building new substations, with the package set to be tendered by the end of the year.

The government has indicated itwill purchase four or five-car trains for the new line. The business case for the project is set to be finalised early next year.

“This is the biggest infrastructure project in Victoria’s history, and it will play a big role in getting our state back on track,” says state premier, Mr Daniel Andrews.

For detailed data on urban rail projects around the world, subscribe to IRJ Pro.