SINGAPORE and Malaysia hope to come to an agreement on the future of the Kuala Lumpur-Singapore high-speed project by the end of the year, Singapore prime minister, Mr Lee Hsien Loong, says. 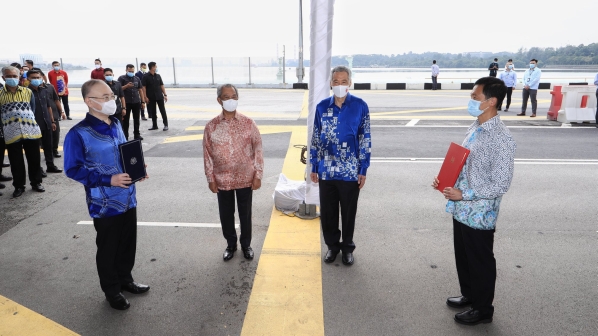 “The Malaysian side has given us certain proposals on the changes, which we are studying carefully and we’ll discuss further with them,” Lee told reporters following a ceremony to mark the official resumption of work on the Johor Baru - Singapore Rapid Transit System (RTS) Link.

Lee said the basic need for the line, to increase business and improve ties between the two cities, were still important, The Strait Times reported.

Work on the Johor Bahru - Singapore RTS, which has been suspended since April 2019 because of political transitions in Malaysia and Covid-19, is due to resume in January 2021.

The 4km line will cross the Strait of Johor on a 25m-high bridge between Woodlands North station in Singapore and Bukit Chagar station in Johor Bahru. The line is now due to open by the end of 2026, two years later than planned, and will have capacity to carry 10,000 passengers per hour per direction.

The RTS Link will now be a standalone light rail transit (LRT) system, instead of a metro line connected to Singapore’s Thomson-East Coast MRT Line (TEL). As a result, the line will no longer use the existing TEL depot at Mandai, and a new depot will be built in Wadi Hana, Johor Baru, Malaysia.

“Officials on both sides put in many months of hard work into the intense negotiations, in order to complete the revised agreements,” Lee says. “Work can now at last resume. The RTS Link is a valuable project to both sides. It will improve connectivity and people-to-people ties between Singapore and Johor.”

The resumption was marked with a bilateral ceremony on the causeway between Singapore and Malaysia. The two countries initially signed a bilateral agreement for the cross-border urban rail link in January 2018.