New line openings at the end of December took the total Chinese railway network to more than 150,000km following a $US 117bn investment in 2021. 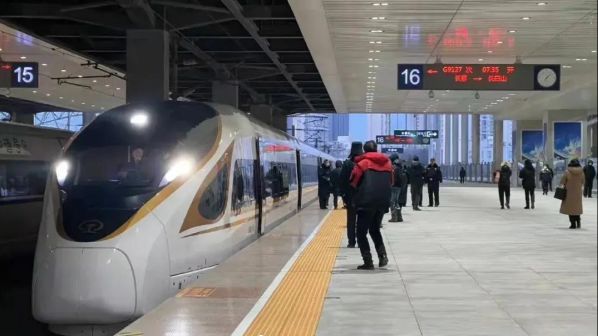 The 99km Changbaishan - Dunhua line is supporting tourism in one of northeast China's most famous natural areas.
Photo Credit: RRC_Weibo

CHINA’s railway network now exceeds 150,000km following the opening of several new lines at the end of 2021, including various high-speed lines, taking the length of the high-speed network to more than 40,000km.

The 176km Anqing - Jiujiang high-speed line opened on December 30. The 350km/h line has stations at Anqingxi, Qianshan, Taihunan, Susongdong, Huangmeidong, Huangmeinan, and Lushan in Jiujiang. The line includes the new Bianyuzhou Yangtse river bridge near Jiujiang and is an integral part of the new Beijing - Hong Kong passenger dedicated line (PDL) via Jiujiang, itself a component of the eight horizontal and eight vertical trunk route plan being implemented throughout the country.

Construction on the line commenced in December 2016 and it is served by eight daily train pairs, which will rise to 24 in the new national timetable that will enter force on January 10. Overall, the timetable will add 96 new passenger services to the national network, and 65 freight services.

The line has reduced journey times between Nanchang and Hefei to 2h 40min, a reduction of at least 1h 20m compared with the existing route via Shangrao. The line includes 36 bridges and viaducts and five tunnels, encompassing 149km or 87% of the route length. The 436km, 350km/h, Ganzhou - Shenzhen high-speed line, a southern section of the Beijing - Hong Kong PDL, opened on December 10.

The 99km Changbaishan - Dunhua section of the Shenyang - Jiamusi high-speed line in northeast China opened for passenger traffic on December 24. The 250km/h line has three stations at Changbaishan, Yong’an and Dunhua’nan and there is an additional 12km link line from Dunhua’nan to Dunhua. The line will also facilitate tourism at Changbaishan, one of northeast China’s most famous natural areas, which straddles the China-North Korea border, and is known by its Korean name of Mount Paektu. The fastest service takes just 37 minutes with five train pairs operating daily at present, which is set to rise to 14 in the new timetable.

Guangzhou’s 88km Nansha port railway opened on December 31. The 120km/h line has eight new stations from Jiangmen via Foshan and Zhongshan to Guangzhou, of which Nansha Port and Nansha Port South stations are both freight-only. Short-term predicted export traffic on the line is 20.7 million tonnes per year, rising to 28.8 million in the unspecified long-term. The port is expected to carry 11.5 million tonnes of import traffic initially rising to 17.8 million. Construction of the railway commenced in October 2016.

In Gansu province, the Jiuquan - Dongfeng section of the Jiuquan - Ejina conventional line opened on December 26. The 241km line cost Yuan 4.4bn to construct over 2.5 years and has eight stations. The line opens a new route between Lanzhou and Jiayuguan, with two trains currently operating per day.

For detailed data on Chinese rail projects and others from around the world, subscribe to IRJ Pro.