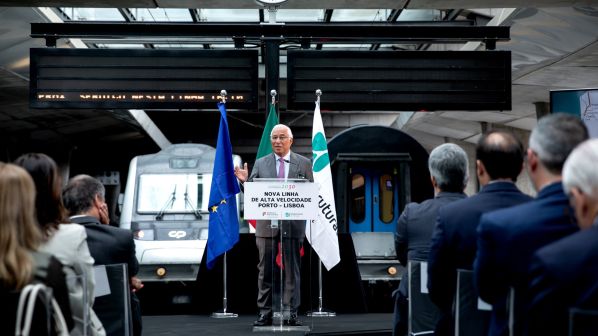 PORTUGUESE prime minister, Mr Antonio Costa, has released details of the new high-speed railway between Lisbon and Porto, that would eventually run to Vigo in Spain. Services on the double-track line built to the Iberian gauge of 1668mm could run at up to 300km/h, reducing travel times between the cities from 2h 49min to 1h 15min.

The project is expected to cost €4.9bn by 2030, including €1bn of EU funding. Construction is divided into three phases, with the first phase between Porto and Soure to be completed by 2028, reducing travel times by 40 minutes. The second phase will connect Soure and Carregado by 2030, while the third phase, between Carregado and Lisbon, will be built at a later date.

Capacity will be increased at Lisbon Oriente and Porto Campanhã stations, while high-speed trains will also serve upgraded intermediate stations in Leiria, Coimbra and Aveiro, as well as a new station at Gaia.

The details were announced during a ceremony at Campanhã station attended by the prime minister,  the minister for infrastructure and housing, Mr Pedro Nuno Santos, and the chairman and vice-chairman of Infrastructure Portugal (IP), respectively Mr Miguel Cruz and Mr Carlos Fernandes.

Multiple connections are planned between the high-speed line and the rest of the Portuguese railway network. The line will eventually be extended to connect with the Spanish high-speed rail network in Vigo.

Portuguese Trains (CP) is finalising specifications for the purchase of high-speed trains, worth €650m, for the new line. This includes a base order for 12 trains, with an option for a further 14.