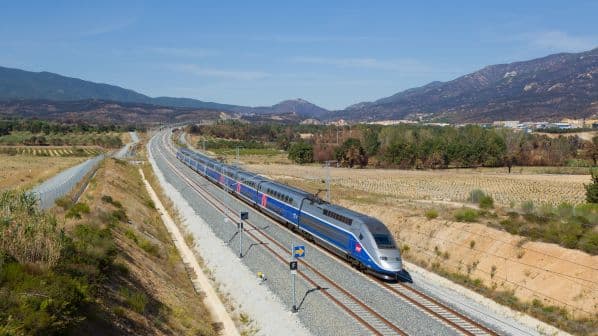 FRENCH National Railways (SNCF) relaunched its high-speed service between Paris and Barcelona under the TGV InOui brand with the timetable change on December 11.

SNCF is promoting high-speed rail as the most environmentally friendly form of public transport, saying that the 100,000 trips made by rail every month between Paris and Barcelona during the summer season produce monthly savings of 25.6 tonnes of CO2 when compared with air travel.

The French national operator reports that over 52,000 tickets were sold after sales opened on October 18, with 38% priced at under €59, and that one passenger in two is travelling to either Paris or Barcelona.

Two services are still provided daily in each direction, and a third pair of trains will be introduced in summer 2023.

Despite high-speed infrastructure being in place over most of the 1000km route, journey times remain between 6h 29min and 6h 52min. With new fares, SNCF is aiming to attract more passengers between the south of France and Spain.

Citing losses on international services between France and Spain, in February SNCF announced that it would end its 50:50 Elipsos joint venture with Spanish national operator Renfe, pulling out of the jointly operated Barcelona - Lyon and Madrid - Marseille routes to concentrate on Paris - Barcelona.

The Barcelona - Lyon and Madrid - Marseille routes were withdrawn with the timetable change on December 11, a move which has led to over 2500 people signing an online petition in protest.

Renfe is fully committed to relaunching the services to Lyon and Marseille using its class 100 high-speed trains but has several hurdles to overcome.

While SNCF is already operating low-cost high-speed services in Spain, Renfe needs to set up a French subsidiary, obtain an operating licence and recruit drivers to work in France. It plans to establish an operating base in Perpignan.

IRJ understands that drivers have already been approached to join Renfe’s new French operation, but it is not realistic to expect the services to Lyon and Marseille to be relaunched before the December 2023 timetable change.

The Italian state operator currently has five Frecciarossa high-speed trains modified to operate in France on its Milan - Paris services, and is modifying a further three.

Trenitalia will also need to obtain approval to operate the Frecciarossa in multiple on the French network.