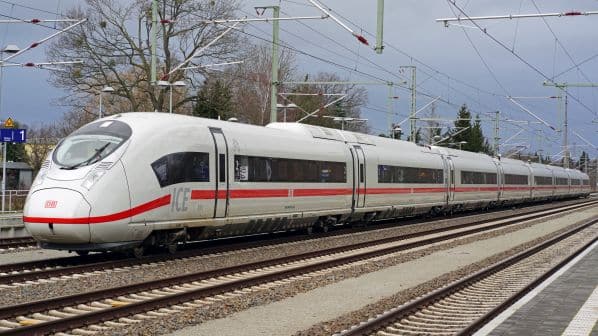 THE Velaro MS multi-system high-speed train that Siemens Mobility is supplying to German Rail (DB) has been granted an Authorisation to Place on the Market (Apom) by the European Union Agency for Railways (ERA), enabling it to operate in Germany.

The new train has also been added to the European Register of Authorised Types of Vehicles (ERATV), with registration taking place on November 14.

The class 408 is 200m long and has seats for 439 passengers. It is rated at 8MW and has a maximum speed of 320km/h, and can also operate at up to 220km/h on routes with dc overhead electrification.

The class 408 can operate in multiple with another train of the same type, or with a class 407 Velaro D high-speed train.

DB plans to introduce the class 408 in commercial service with the forthcoming timetable change on December 11. The services that will be operated by the new type include Dortmund/Cologne - Frankfurt - Stuttgart - Munich, Cologne - Wiesbaden - Mainz and Cologne - Frankfurt.

The class 408 will be deployed on the Frankfurt - Cologne - Brussels route in December 2024, replacing DB class 406 ICE 3M multi-system trains, and from Frankfurt and Cologne to Amsterdam.

Authorisation for the class 408 to operate in Belgium and the Netherlands is scheduled for the end of 2024.