SERVICES on the final section of the first phase of the Aarhus light rail project are set to commence on April 30. 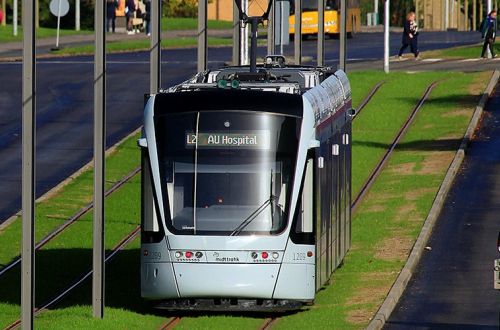 LRVs will operate for the first time on the converted heavy rail section between Aarhus Central station, Aarhus Øst and Grenaa, and on the extension of the existing double-track line between Lisbjerg and Lystrup, where there is an interchange with the line to Grenaa.

A half hourly service as far as Ryomgård and hourly to Grenaa will initially be available until Banedanmark upgades the line to 100km/h and establishes a passing loop in Trustrup. This will enable an extension of the half-hourly service all the way to Grenaa.

Service frequencies are also set to increase from half-hourly to 15-minute intervals on the Aarhus Central - Marslet section of the Odder line on April 30.

The complete line from Odder in the south to Grenaa in the north east is 110km.

Planning work is underway for the second stage of the project. Section 1 is an extension to the newly-developed eastern harbour in Aarhus while Section 2 involves building a branch running east from central station to the suburb of Braband via the city centre. Part of the route will use the alignment of an abandoned heavy rail line.

Section 3 will extend Line 2 north from Lisbjergskolen to Hinnerup, where a park-and-ride station will be built near the E45 highway.

Financing for the 2km harbour section is in place thanks to income from property sales. This line will share the section of the existing line between Aarhus Central station and Nørreport.

For more details on light rail projects from around the world, subscribe to IRJ Pro.