THE Norwegian city of Bergen marked the completion of the third phase of its light rail network on April 21 with the inauguration of the 2.2km section from Birkelandsskiftet to Bergen Airport. 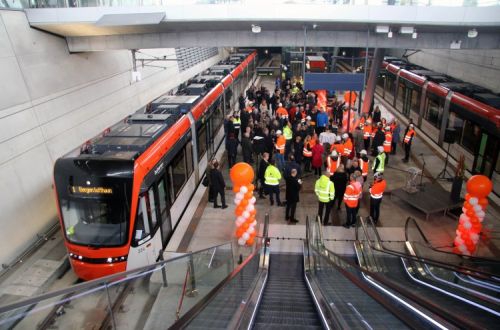 Public services began the following day on the two-station extension and services operate at five-minute intervals at peak times, with a 45-minute journey time from the airport to the line’s northern terminus at Byparken in the city centre.

The new station at the airport is located outside the New Terminal, which is due to open on August 17. The existing terminal is a 3-5 minute walk from the station.

The 4.8km Lagunen - Birkelandsskiftet section of Phase 3 opened last August. The total budget for both sections of the 7km extension was NKr 3.7bn ($US 430m).

Stadler has supplied eight additional Variobahn low-floor LRVs for the extension to Birkelandsskiftet and the airport. At 42.1m in length, the seven-section vehicles are 9.9m longer than Bergen’s existing Variobahn LRVs.