The 13.4km light rail line has been completed at around SFr 160m under budget. 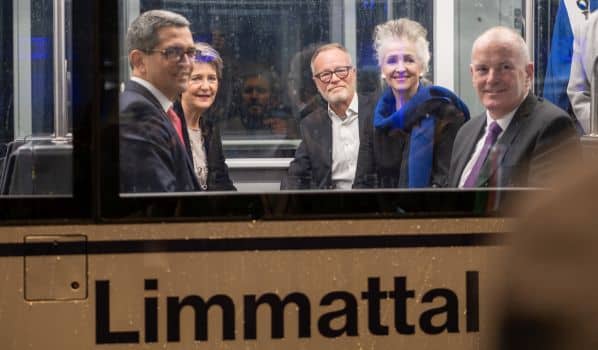 AFTER a construction period of more than five years, Switzerland’s Limmattalbahn light rail project has been officially inaugurated on time and under budget, with the opening ceremony taking place on December 10 and public services beginning the following day.

Construction of the 13.4km, 1000mm-gauge light rail line was financed by the cantons of Zurich and Aargau along with the federal government, and has been achieved at around SFr 160m ($US 170.9m) under budget.

Project planning of the line was geared towards it coming into service in time for the timetable change on December 11, with Limmattalbahn managing director and overall project manager, Mr Daniel Issler, expressing his satisfaction that this deadline could be met while achieving cost savings.

Operated by Aargau Transport (AVA) as Line 20, the Limmattalbahn is served by 18 LRVs operating every 15 minutes between Zurich Altstetten and Killwangen-Spreitbach, with services beginning at 05.03 daily and the last departures leaving Killwangen at 23.42 and Altstetten at 00.23. The line is electrified partly at 600V dc and partly at 1.2kV dc and runs for 92% of the route on its own alignment. The new fleet was ordered following a joint tender issued with Baselland Transport in 2017.

Tenders were invited for civil works and railway elements of the light rail line in June 2014, with the cost of the project estimated at that time at SFr 715m ($US 797m). Federal approval for the project was confirmed in April 2017.

“Even if the final accounts are still not known in detail, the Limmattalbahn will receive a maximum of SFr 600m instead of the budgeted cost of SFr 755m,” Issler says. “Reasons for this include the fact that the financial reserves are not being used and that several large construction contracts could be awarded more cheaply.”

The opening ceremony in Dietikon was attended by 400 invited guests, the depot location having been chosen as it is close to the border of the two cantons served by the new line. For the opening day services ran every 15 minutes between Schlieren Geissweid, the depot and Killwangen railway station.