First of the Alstom Flexity LRVs will be delivered in 2023 ready for introduction in 2024. 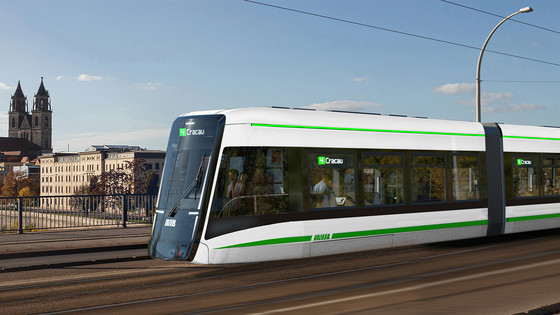 MAGDEBURG Transport (MVB) has selected Alstom to supply 35 Flexity low-floor LRVs. Deliveries will begin in 2023 with the first vehicles entering service in 2024.

The contract, worth €190m, includes an option for a further 28 LRVs as well as component supply for 24 years. The LRVs are needed due to increasing passenger numbers and route extensions relating to the second North-South Link that will connect the Reform, Neustädter Feld and Kannenstieg districts of the German city to the existing light rail network.

Each four-car LRV is 38m in length (8m longer than those they will replace) and can transport 241 passengers. There are two multi-purpose areas for strollers, bicycles and wheelchairs. The LRVs will feature air-conditioning and wide, barrier-free entrance areas enabling fast boarding. They will be fitted with energy-efficient lighting including LED light strips.

The LRVs will be fitted with an Obstacle Detection Assistance System (ODAS) driver assistance system.

The state of Saxony-Anhalt is contributing €60m towards the purchase of the LRVs, which will replace 25 NGT 8D trams currently in service. The tender for the contract was issued in June 2020 after a delay of a year while MVG waited to secure the funding.

“As a state, we are supporting this major project with funding, as we are certain that the transformation of transport can only succeed if we work together,” says Mr Thomas Webel, minister of transport for the State of Saxony-Anhalt.

For detailed data on LRV tenders from around the world, subscribe to IRJ Pro.