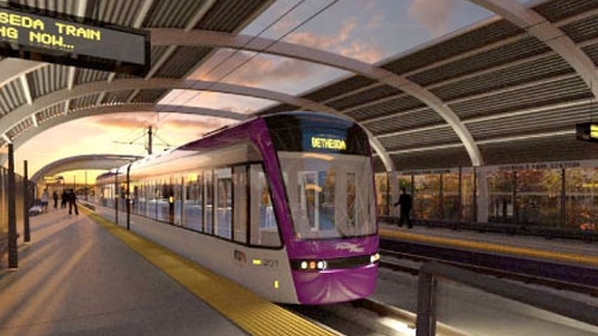 The line from Bethedsa to New Carrollton was being built for Maryland Department of Transportation (MDOT) and Maryland Transit Administration (MTA) under a $US 5.6bn 36-year public-private partnership (PPP) deal agreed with PLTP in spring 2016.

Hundreds of contracts are now being handled by the state. The state and subcontractors will work together to jump-start stalled corridor construction over the next 30 days. Maryland Transportation secretary, Mr Greg Slater, told Washington new site DCist that the project could now be delayed by years, and it could take months before officials have the altered plan worked out.

The contracts that the state has assumed include the manufacturing of the LRVs, the eventual operations and maintenance of the rail line, and 233 design and construction contracts and other agreements, the Washington Post reports.

Purple Line Transit Constructors (PLTC) notified PLTP of its intent to exit the PPP on May 1. In a letter confirming the decision, project manager Mr Scott Risley said delays caused by a lawsuit, problems obtaining land for the right-of-way, last-minute changes in design requirements and difficulties in obtaining state environmental approvals, had added 2.5 years and $US 519m to the cost of the project. This overrun figure has now increased to around $US 800m.

Fluor is the managing partner of the PLTC design-build team, which comprises Fluor Enterprises, The Lane Construction Corporation and Traylor Bros. PLTP, the concessionaire and proposer for the line, is led by Fluor, Meridiam and Star America.

In September, a judge ruled that the contractors involved in the project could quit if problems with cost overruns and delays were not resolved with the state.

Last week, PLTP entered a forbearance agreement with its lenders, a move that allowed the firm to make a $US 7.8m debt payment that was due on September 30. The agreement runs until the end of October and does leave open the possibility that the state and PLTP could resolve their differences and the PPP, one of the largest in the country, could be saved.

For now, half-constructed bridges and torn up roads litter the route, but the state has assured county administrators everything will be taken care of as soon as possible.