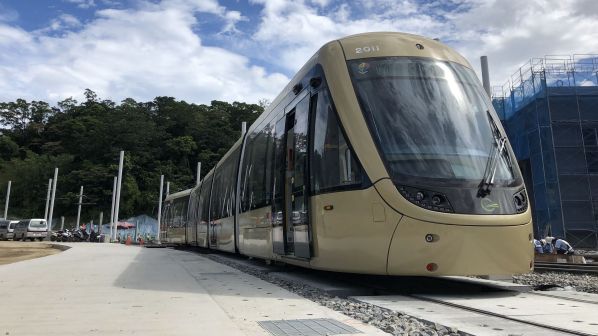 THE Ankeng light rail line in New Taipei will not open before the start of the Lunar New Year holiday on January 20, as hoped, after an inspection by the Ministry of Transport and Communications (MOTC) identified six issues requiring rectification.

These included mainly cosmetic issues at the nine stations on the route, such as broken tiles, as well as missing safety signage and the lack of transformer wiring diagrams in substations.

MOTC also identified 11 issues that the operator would need to be aware of when the line opens and made 12 suggestions for improving the service once it starts carrying passengers.

In response to the MOTC report, the mayor of New Taipei, Mr Hou Yu-ih, said the city government was confident that the six issues identified by the inspection would be rectified quickly.

He added that a report would be submitted to MOTC by the city government after the Lunar New Year holiday, and was confident that Ankeng line would enter service very soon.

The Ankeng line runs for 7.5km from Shisizhang station on the Circular or Yellow Line of the Taipei metro to Erbazi Botanical Garden, with four at grade and five elevated stations.

Taiwan Rolling Stock Company has supplied a fleet of 15 LRVs which will be maintained in a new depot at Ankeng.

The New Taipei city government had hoped to open the Ankeng line before the end of 2022, but says that this target was not met due to cost inflation and a shortage of personnel.

Elsewhere in New Taipei, the Taiwanese government has approved the construction of a metro [KS1] line with six stations from the Sijhih district to the Donghu area of Taipei.

The government has allocated $NT 27.84bn ($US 916.18m) to fund the Donghu - Sijhih line, which according to the New Taipei City Department of Rapid Transit Systems is expected to cost a total of $NT 37.69bn.

The city of Keelung is expected to contribute $NT 9.8bn under a standing agreement, while New Taipei would provide $NT 22.05bn and the Taiwanese government $NT 5.76bn.

The department is ready to begin planning and design of the Donghu - Sijhih line, according to Mr Chen Chih-ming, deputy director general of the construction division.

He added that funding challenges were expected, and that tendering civil works contracts could be difficult given the current heavy workload for contractors with the relevant experience.

The department has also asked the Taiwanese government to expedite approval of building the Keelung and Minsheng - Sijhih lines, which would connect Keelung, New Taipei City and Taipei.