HORDALAND County Council and Bergen Bybanen have signed a NKr 532m ($US 90.2m) contract with Skanska Norway for the construction of two sections of the third phase extension of Bergen's light rail line from Lagunen to Flesland Airport. 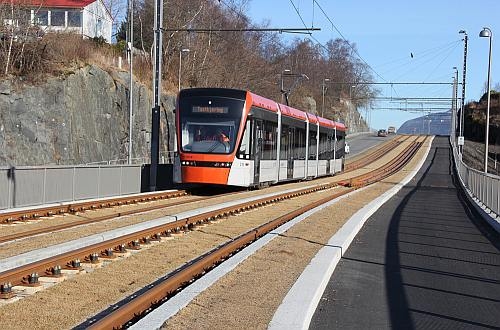 Skanska will build the 1.7km Sandslivegen – Kokstad section (C12), which is worth NKr 420m and runs from the end of Sandsli River bridge through a short tunnel at Sandsli Hovden to the Birklandsskiftet bridge. C12 is due to be completed in December 2014. It will also build the NKr 112m Flesland section (C14), which primarily covers the construction of a 540m tunnel at the southern end of the line. This section is due to be completed in December 2014. Work is scheduled to begin on both sections later this month.

Civil works on the 7km extension are being tendered in five sections, the largest being a NKr 634m contract to build the 2.7km Langunen – Sandslivegen stretch (C11), which was awarded to Veidekke Entreprenor, Norway, last month.

Commercial services are due to start on the extension in mid-2016.