13,000km of electrification required plus battery and hydrogen to decarbonise British network

BRITISH infrastructure manager Network Rail (NR) has released the interim programme business case for its Traction Decarbonisation Network Strategy (TDNS), developed in response to the government’s plan to achieve net zero greenhouse gas emissions by 2050, which recommends a rolling programme of electrification across up to 13,000 track-km. 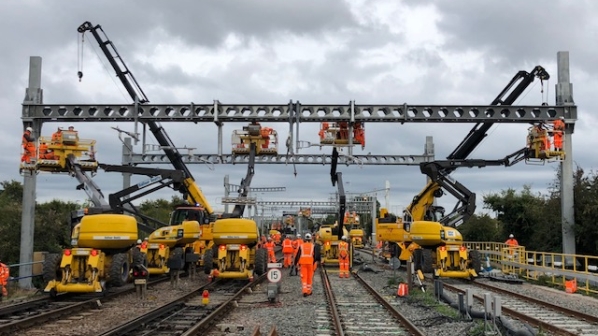 In order to achieve the goal of net zero greenhouse gas emissions, the Department for Transport (DfT) asked the rail industry to explore whether it would be possible to remove all diesel-only trains from the network by 2040 in England and Wales. The Scottish government has also set a target to decarbonise domestic passenger rail services by 2035.

The strategy developed by NR outlines the reasons for decarbonising the network, and analyses the roles of overhead electrification, battery and hydrogen fuel cells in achieving this objective.

Of the 2300 track-km where “multiple options” could be delivered, operational and economic analysis has identified a further 1340 track-km of electrification, battery operation over an extra 400 track-km and hydrogen operation on an additional 400 track-km.

Further work at a local level is needed for the remaining 260 track-km where no clear decision has yet been made. However, a likely technology is identified within the TDNS national recommendations.

The strategy also recommends that any proposed new railway should consider the need to operate using zero carbon rolling stock such as battery, electric or hydrogen, in conjunction with the wider network to which it is linked.

Battery and hydrogen train operation should be launched wherever possible to ensure standards are developed, whole-system operational experience is gained, and lessons are learned, the report says.

It adds that diesel-only trains should only be purchased where there are clear strategic and economic reasons for doing so. Where diesel is chosen, the possibility to replace the diesel engines with a zero-carbon alternative at a later date must exist.

NR says a stable and efficient programme of traction decarbonisation is the most efficient way to deliver the work in the TDNS and will enable lessons learned from previous electrification projects to be incorporated.

“Carrying out this work in a way that is efficient and represents best possible value for money is essential,” says NR managing director system operator, Mr Paul McMahon. “This strategy shows that the best way of doing this includes a long-term, stable and efficient programme of electrification which will last for at least 30 years, alongside the introduction of new technology. If we can do this, I am confident that rail will play a vital role in helping build Britain back better and achieve the government’s commitment to achieve net zero by 2050.”

NR says implementing the 13,000 track-km of electrification required presents a capacity challenge to the industry. Analysis undertaken by the Railway Industry Association (RIA) found that delivering 450 track-km of electrification per year is within the supply chain’s capability, assuming that activity is gradually built up over several years and a commitment is made to a stable and efficient programme of work. The report says this stability is critical to ensuring that jobs are retained, the need for additional training is reduced, and the programme is a cost-effective solution.

A highly skilled and specialised workforce is also needed to deliver this work. The report says this could be efficiently achieved by employing specialist delivery teams that consistently move from project to project, each delivering 75 to 100 track-km per year.

“We are committed to delivering significant reductions in emissions from all modes of transport, making public transport and active travel the natural first choice for our daily activities, and setting out a bold and ambitious vision for a net zero carbon transport system by 2050,” a DfT spokesperson says. “We welcome this interim advice from NR which will help inform decisions about the scale and pace of rail decarbonisation, to be taken as part of the Transport Decarbonisation Plan later this year.”

A detailed analysis of the strategy will appear in the October issue of IRJ.