A financial agreement has been reached between all partners involved in the Pennsylvania Station-Farley Complex project to transform New York City’s James Farley Post Office into a world-class transport hub to relieve pressure on the cramped facilities at Penn station. 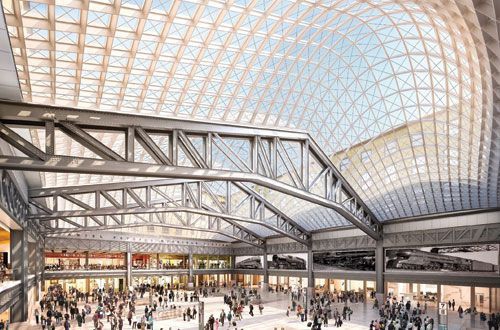 The $US 1.6bn project is being funded with $US 550m from New York state, $US 420m from Amtrak, the Metropolitan Transit Authority, the Port Authority of New York and New Jersey and federal grants, and $US 630m from the joint venture developers.

Nine platforms and 17 tracks will be accessible from the train hall, which will provide direct connections to the Eighth Avenue Subway (lines A, C, E) and create direct access to the station from 9th Avenue for the first time.
The Penn-Farley Complex project includes a comprehensive redesign of the LIRR’s existing 33rd Street concourse at Penn Station and an extensive renovation to the adjacent Seventh and Eighth Avenue subway stations.

The first phase of the Farley project, a new Eighth Avenue entrance and concourse, opened on June 16. The new train hall is scheduled to be completed by the end of 2020.

“Fifty years after the loss of the original Penn Station structure, passengers will once again experience a world-class rail hub worthy of New York,” says New York’s governor Mr Andrew Cuomo. “The Farley Buildings Moynihan train hall is two decades in the making, and we are proud that this project is finally a reality. With better access to trains and subways and state-of-the-art infrastructure, the Moynihan train hall seamlessly joins history, architectural design and function, bringing the nation’s busiest rail station into the 21st century.”