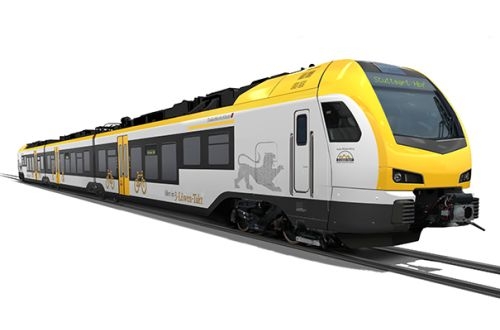 Stadler Flirt EMUs will be used on the Go-Ahead-operated networks.

The three contracts, which will be signed after a 10-day appeal period, cover the operation of a total of 14.8 million train-km per year and state transport minister Mr Winfried Hermann says that the average price per train-km has halved in real terms compared with its 2003 contract with DB Regio, being reduced to €11.69 per train-km.

The largest of the three contracts, Lot 1a (Neckar network), has been awarded to Abellio and covers the operation of 6.8 train-km per year on three routes:

Abellio will operate these services using a new fleet of 43 Bombardier Talent 2 EMUs.

The two remaining contracts will be awarded to Go-Ahead and mark the company's entry into the German regional rail market. Lot 1b (Rems-Fils network) covers the operation of 3.7 million train-km per year on the Stuttgart - Aalen - Crailsheim and Stuttgart - Geislingen - Ulm lines. Lot 1c (Franken- Enz network) covers 4.4 million train-km per year on three lines:

All trains will be equipped with air-conditioning, folding tables, at-seat power sockets, passenger Wi-Fi, and accessible toilets. There will be between 24 and 51 bicycle spaces on each train, depending on the type of rolling stock and formation.

Hermann says there has been considerable interest in the contracts and seven of the original ten bidders submitted offers.

Go-Ahead says it expects to generate combined revenues of around €1.6bn over the duration of its two contracts.