THE Slovakian narrow-gauge rack-and-pinion line between Štrba and Štrbské Pleso closed for a seven-month modernisation programme on July 5, with both the line and the rolling stock due for renewal. 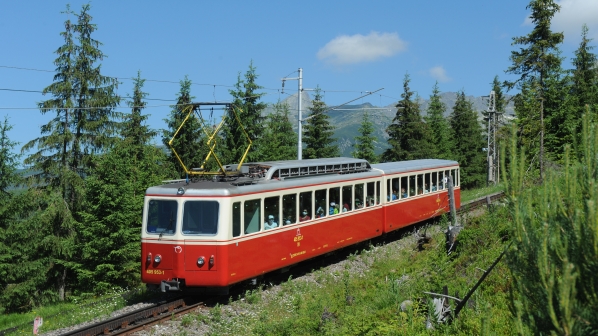 The five class 405 rack-and-pinion trains ordered from the Swiss Locomotive and Machine Factory (SLM) in Winterthur, Switzerland, have been removed from service as part of the modernisation of the line.
Photo Credit: Qunitus Vosman

The metre-gauge line in the High Tatra Mountains runs from Strba station along the Košice - Žilina corridor to Štrbské Pleso, a winter sports and spa town at an altitude of 1346m. The maximum gradient along the line is 15%, necessitating rack-and-pinion operation. The line is part of the High Tatra narrow gauge Electric Tatra Railways (TEŽ), operated by Slovak national railways (ŽSSK), and is the only line in the network to use rack-and-pinion.

A 4.75km line along the route first opened in 1896, but this was closed in 1932 with the infrastructure removed in the 1940s. Due to a ski championship in 1970 and increasing tourism, the line was rebuilt in 1968 with a short section rerouted from the original line.

Five new class 405 rack-and-pinion trains were ordered from the Swiss Locomotive and Machine Factory (SLM) in Winterthur, Switzerland, for operation on the line. These five trains comprised a fixed composition of a powered coach and driving trailer. The vehicles are similar to trains operating in Switzerland, which were built for the Arth Rigi Railway.

The Swiss-built class 405 trains have now been withdrawn from services and will be replaced by five new rack-and-pinion trains from Stadler, which was selected in October 2018 following a tender process.

The trains are new-generation electric low-floor GTW trains, which will be suitable for operation along both the rack-and-pinion line and conventional TEŽ lines. This will allow through services to operate past Štrbské Pleso, which the class 405 trains were unable to do. The new trains offer 91 seats and have two spaces for wheelchairs as well as a multi-functional space for bicycles and push chairs.

Stadler Rail will also deliver a hybrid diesel-electric locomotive, which will be used for snow ploughing in winter and infrastructure works. The locomotive can be operated through remote control, while the diesel engine meets Euro IIIB emission standards.

Stadler delivered 15 class 425 electric GTW trains to ŽSSK for regular operation on the TEŽ network in 2000.