Under the trial, the driver takes over the guard’s role during departure. 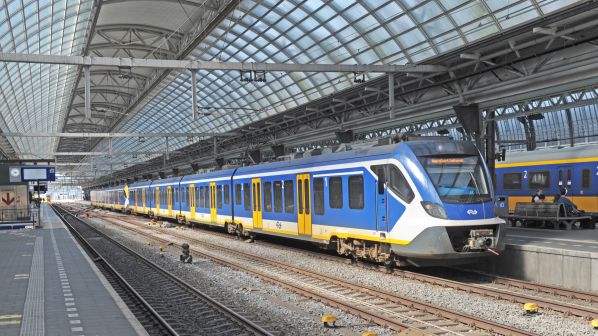 NETHERLANDS Railways (NS) began test operation of the Airport Sprinter service on August 16, which will operate from Amsterdam Central via Schiphol Airport to Hoofddorp using the new “technically guided departure process,” as part of a major restructuring of rail services around the Dutch capital.

Instead of the guard executing the train departure process, this will instead be performed by the train driver. NS hopes this process will reduce dwell times at stations, while the guard will remain focused on passenger duties.

Test operation is taking place on Tuesdays and Wednesdays as part of regular operation over a six-week period, using a CAF-built Sprinter New Generation EMU equipped with extra CCTV cameras at the passenger doors.

NS says it is using the tests to examine “the interaction between humans and [the] technique.” The test is accompanied by messages broadcast over the public address system on platforms where extra staff are present.

NS has already conducted tests with CAF, including using dummies and a toy dog to simulate passengers and their pets boarding the train, with these successfully completed. NS now plans to introduce the Airport Sprinter as its standard rolling stock for services between Amsterdam Central and Schiphol Airport.

The introduction of the Airport Sprinter is in anticipation of the withdrawal of inter-city services between Amsterdam Central and the airport. This was due to be implemented in December 2023, but late delivery of the new ICNG inter-city fleet by Alstom has resulted in the change being postponed.