CZECH open-access operator RegioJet has announced plans to extend its Prague - Vienna service to the Hungarian capital Budapest starting in June 2020. Two of RegioJet’s four daily Prague - Brno - Vienna services will be extended to Budapest, and RegioJet says the additional services have already been put into the 2020 timetable proposal. 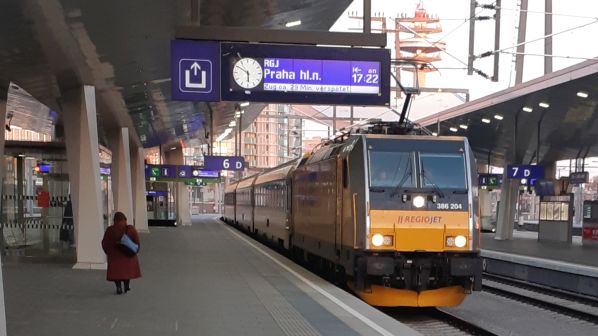 A RegioJet train at Vienna Main Station ready to depart to Prague. Next year, some of these trains will be extended to Budapest.

RegioJet has engaged Austrian open-access operator Westbahn and Hungarian operator Continental Railway Solution as the train operator in their respective countries. The two companies will provide drivers and conductors to operate the trains in Austria and Hungary. However, RegioJet on-board staff will work on the trains throughout each trip.

RegioJet will only carry international passengers within Hungary. RegioJet will serve Déli station in Budapest and will make intermediate stops at Budapest Kelenföld, Györ and Mosonmagyaróvár. Prague - Budapest services will serve Meidling station in Vienna rather than the Main Station.

RegioJet will use either Bombardier four-voltage Traxx or Siemens Vectron locomotives to haul the trains in Hungary as it already does between Prague and Vienna. It is also considering adding more locomotives and coaches to its fleet.

RegioJet offers three classes of travel - Standard, Relax and Business - but all passengers receive RegioJet’s full onboard service including seat reservations and free beverages, newspapers, Wi-Fi, and entertainment with movies and music. Business Class passengers receive an enhanced service including a free glass of champagne. Passengers can also purchase light meals and refreshments.

“Our policy is to be the best value for money for passengers on rails,” says Ms Ivana Kašická, general manager of RegioJet trains and buses. “For example, on Prague - Vienna route we have proved that it is possible to offer a much higher quality of service on trains for much lower prices in comparison with the traditional train operators.”

RegioJet, which is a subsidiary of Student Agency, reported profit of around €4m in 2018 and transported almost 10 million passengers on its open-access rail services in Austria, the Czech Republic and Slovakia. RegioJet also operates regional trains between Bratislava and Komárno in Slovakia under a public-service obligation (PSO) contract. RegioJet says it expects further profit growth in 2019 and to increase passenger numbers by 10-15%.