The contract begins in December. 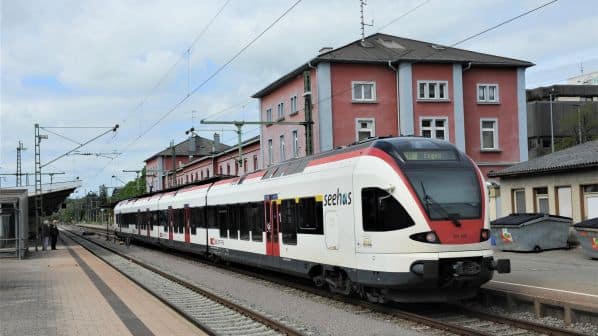 THE German state of Baden Württemberg has signed a contract with Swiss Federal Railways (SBB) to operate services on the Singen - Schaffhausen cross-border regional railway. SBB’s subsidiary SBB Germany was the only bidder for the five-year contract, which will begin in December.

Baden-Württemberg announced in March 2021 that it was terminating the existing contract with DB Regio in summer 2021 instead of December 2023.

Services on the line operate half-hourly from early morning until late evening and are funded by the regional public transport authorities of the Constance area and the Swiss region of Schaffhausen.

The contract will focus on improving service quality, while train maintenance facilities will be relocated closer to the line. Three-car GTW 2/8 EMUs built by Stadler will be used, and will operate in multiple with a two-car GTW 2/6 during peak hours.

SBB Germany currently operates the Erzingen - Schaffhausen regional railway, with this contract extended from 2023 until 2027.

• Mr Gregor Frei has been appointed as the CEO of SBB Germany from October 1, replacing Mr Patrick Altenburger, who has taken a position as CEO of Schaffhausen Transport Authority in Switzerland.