CRRC Sifang’s American subsidiary held a ceremony on March 16 to mark the beginning of construction of its new 35,391m2 assembly plant in Chicago, which will produce 846 7000 series metro cars for Chicago Transit Authority (CTA), and create over 300 jobs. 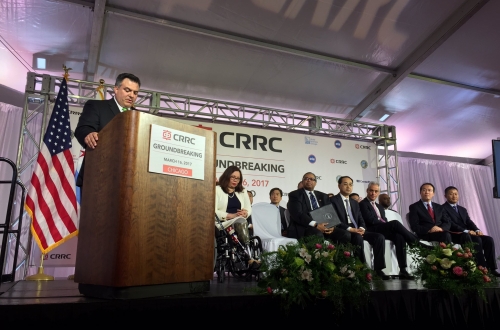 The contract, which was awarded in March 2016, comprises a firm order of 490 cars with an option for 356 more vehicles. The $US 100m plant is being built on the southeast side of Chicago’s Hegewisch neighbourhood, and will employ 169 factory and warehouse workers. Around 200 jobs will be created during construction.

The first pre-series cars are due to be completed in 2019 and will enter passenger service the following year.

The 110km/h 14.63m-long vehicles will also be equipped with LED lighting, modern passenger information systems, and ac traction motors, and will allow CTA to withdraw its 2600 series trains which were supplied by Budd between 1981 and 1987.