THE BOARD of Ile-de-France Transport Authority (Stif) voted on June 5 to approve a €100m contribution towards a €256m project to automate Paris's second-busiest metro line. 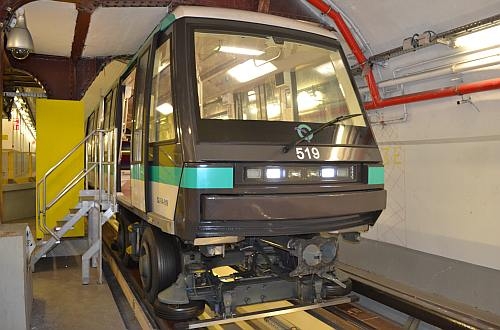 Line 4 runs for 12.1km Porte de Clignancourt to Mairie de Montrouge and carries around 740,000 passengers per day, second only to Line 1, which has already been converted to driverless operation.

Line 4 will receive the fleet of MP89 trains currently in use on Line 14, which will be released by the delivery of new trains being ordered in connection with the extension from St Lazare to Mairie de St Ouen.

Patronage has increased on the line following the opening of the 1.5km southern extension from Porte de Orléans to Mairie de Montrouge, and a further 1.7km extension to Bagneux is due to open by the end of 2019.

The remaining €156m will be financed by Paris Transport Authority (RATP) and the first driverless trains are due to run on Line 4 in 2020.

- The board of Stif has also approved a €88m order for 15 Alstom Citadis Dualis tram-trains for use on the Epinay – Le Bourget section of the Tram Express North line, which is due to open in July 2016. The vehicles (pictured) will accommodate up to 251 passengers, 102 of them seated, and deliveries are due to start in Spring 2016.