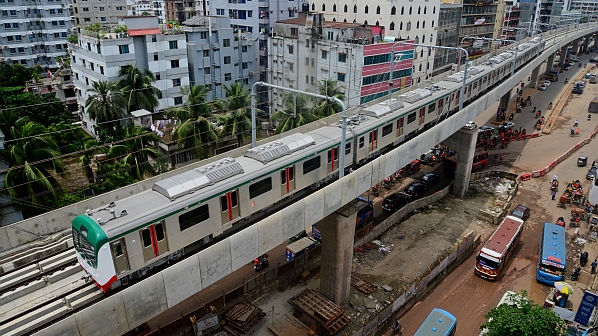 THE Japan International Cooperation Agency (Jica) has signed a loan agreement with the government of Bangladesh to provide Yen 133.4bn ($US 984.6m) for the MRT Line 5 North metro project in Dhaka.

The loan bears an annual interest rate of 0.7% for the project and 0.01% for consultancy services. The repayment period is 30 years with a grace period of 10 years.

Jica says that MRT Line 5 North will contribute to sustainable development goals by alleviating traffic congestion and mitigating air pollution in Dhaka, one of the most densely populated cities in the world, improving the urban environment and contributing to economic development.

The MRT Line 5 North project is being executed by Dhaka Mass Transit. The new line will run between Hemayetpur and Vatara with a 13.5km underground section between Gabtoli and Notun Bazar.

Opening is scheduled for November 2029 with a daily passenger capacity of 400,000.

Detailed design, tender assistance and supervision of construction work is being undertaken by a consortium appointed by Dhaka Mass Transit in 2020, led by Japanese engineering consultancy Nippon Koei and also including Systra, Delhi Metro Rail and Development Design Consultants, Bangladesh.