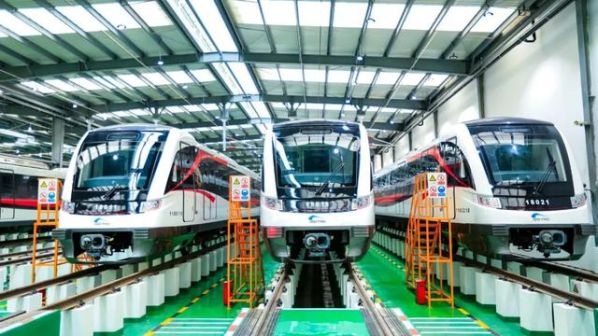 The line has been constructed to enable speeds of up to 160km/h and is electrified at 25kV ac 50Hz, rather than the 1.5kV dc standard used on the network’s other metro lines. Trains will operate every 4.5 minutes during peak hours from 06.00 until midnight, and offer travel times of around 31 minutes from end to end.

Phase 2 will extend the line 18km beyond Sancho to connect it to the two terminals of city’s new Tianfu International Airport, which is scheduled to open for flights from the first half of 2021. Chengdu Metro says that the extension is scheduled to begin operation by the end of 2020.

When the airport extension opens, the line is expected to operate express services utilising passing loops to overtake stopping trains, which will provide travel times between South station and the airport of 35 minutes, compared with 50 minutes for regular stopping services.

A further Yuan 14.7bn ($US 2.16bn) Phase 3 expansion of Line 18 is planned. An environmental impact report for the expansion was approved by the Sichuan provincial government on December 9 2019.

Phase 3 will include an 11km northern extension to serve downtown Chengdu with four new stations, and provide full parallel services to Line 1, and a 5.75km southern extension which will extend Line 18 beyond Tianfu airport to Guanyan, adding two stations and a depot at Linjiang.

Line 18 will be operated using a fleet of 26 eight-car Type A metro trains supplied by CRRC Sifang. The trains can operate at 140km/h and have a maximum capacity of 2958 passengers.

The 26km Chengdu Metro Line 17 between Venus East and Jitouqiao is also scheduled to open by the end of this year.

Ningbo Rapid Transit began operation of a 15.9km extension of its metro Line 3 on September 27, following an inauguration attended by the city mayor, Mr Qiu Dongyao.

The extension is part of the elevated Yinfeng commuter line, and runs from Minghui Road to Jinhai Road, adding six new stations and extending Line 3 to 38.2km.

The line allows for operation at speeds of 120km/h and will be operated using six-car Type B metro trains.

The new extension follows the opening of a previous 5.6km extension to Line 3 between Gaotang Bridge and Minghui Road, which opened on September 28 2019.