TRACKLAYING is underway on Sydney Metro’s 31km City & Southwest project at Chatswood following the completion of tunnelling for the project, which runs beneath Sydney harbour, in May 2020. 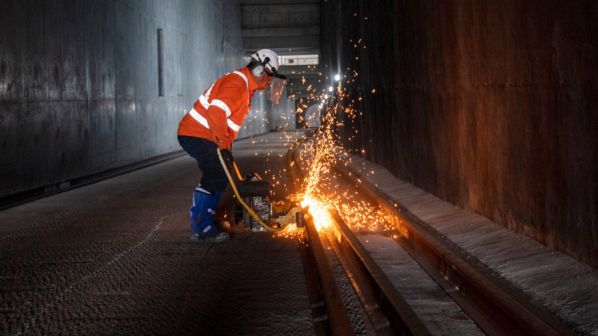 Sydney Metro says that over the coming months 62km of steel weighing more than 4000 tonnes will be used to lay track in the dual bore tunnels which run from Chatswood to Sydenham. The rail steel has been distributed through the tunnels using custom-designed excavators which can turn 360 degrees within the tunnels.

The line’s contractor, Systems Connect, is delivering the track work as well as expanding the Sydney Metro Trains facility at Rouse Hill, building a new facility at Marrickville and installing power systems for the new network.

The 30km Sydney City & Southwest is effectively an extension of the 23km Metro Northwest line, which opened in May 2019. It is scheduled to open in 2024 and as well as the new line in tunnels, will run use the existing 13km Sydney Trains T3 alignment from Sydenham to Bankstown, which will be upgraded for metro operation.

For an in-depth article on plans to develop Sydney’s Metro network, see the October 2020 edition of IRJ p26, or click here.