THE City of Warsaw has issued a tender notice for contracts to build two extensions to metro Line 2, just weeks before the opening of the initial 6.5km section of the east-west line from Dworzec Wileński with Rondo Daszyńskiego. 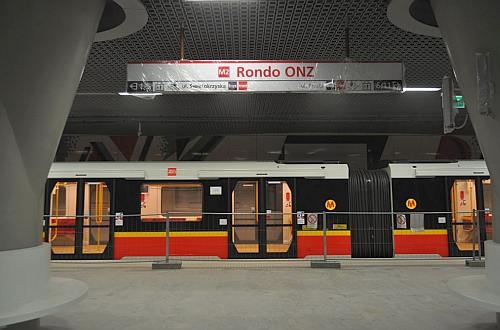 Construction is divided into two lots for the eastern and western extensions, which like the central section will both run completely underground. To the west the line will be extended 3.4km from Rondo Daszyńskiego to Wolska, Moczydlo, and Ksiecia Janusza, while the eastern extension will run for 3.1km from Dworzec Wileński to Swedzka and Targowek. The deadline for submission of bids will be the end of the first quarter of next year and both extensions are due to be commissioned in 2019.

The total budget for the two extensions is Zlotys 4bn ($US 1.2bn) including rolling stock, and the City of Warsaw hopes to finance up to 85% of the project through the European Union's Infrastructure and Environment Programme for Poland.

Trial operation is now underway on the first phase, which is due to open on November 11. Services will be operated by a fleet of 20 six-car Inspiro metro trains being supplied by a consortium of Siemens and Newag.