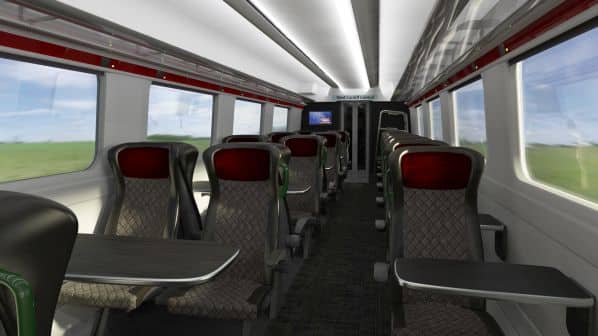 Grand Union says that its new fleet will offer better seats and more space than the trains of other operators.
Photo Credit: Grand Union

BRITAIN’s rail regulator, the Office of Rail and Road (ORR), has approved a 10-year track access contract that will enable open-access operator Grand Union to run five return services a day between London Paddington and Carmarthen from December 2024.

Following an application to run seven trains a day between London and Carmarthen that was rejected by ORR in February 2021, on June 21 Grand Union applied to run five services a day from December 2024.

Grand Union also applied for access rights to call at new stations to be built at Cardiff Parkway and Felindre (for Swansea) and a 20-year track access contract running until 2044 based on investment in new rolling stock, the new station at Felindre and improvements at Severn Tunnel Junction.

In its decision letter of December 1, ORR says that following discussions between its case team and the applicant on the additional evidence required to approve rights for unbuilt stations and a “significant” 20-year contract length, Grand Union told the regulator it was willing to accept a 10-year contract based on investment in new rolling stock only.

In addition, the 10-year contract does not contain rights to stop at Cardiff Parkway and Felindre or a firm commitment by Grand Union to investment at Felindre or Severn Tunnel Junction.

Grand Union’s application was strongly opposed by GWR on the grounds that the ticket revenue that the open-access operator would abstract from its own services would be “exceptionally high in volume,” risking the viability of GWR services on the route.

Abstraction would also cause “severe damage” to the funding available to the government for the railway as a whole, GWR argued.

As ORR notes, where existing operators such as GWR bear revenue risk, revenue loss is expected to eventually lead to lower premium payments by operators to the Department for Transport (DfT), or higher subsidy payments from DfT to operators.

GWR also raised operational concerns, including the lack of a notional timetable and information on the arrangements for maintaining and stabling the new Grand Union fleet.

The incumbent operator said that there was “no material latent demand to tap” and that the new station sites would merely abstract current rail revenue.

In its assessment, ORR considered Grand Union’s business plan and proposed operational strategy, and found that the proposals were both operationally viable and supported by a plausible delivery plan.

ORR’s key criterion for assessing abstraction is the Not Primarily Abstractive (NPA) test, which determines whether new revenue is sufficient to compensate for the impact on government funds.

It is estimated on the basis of revenue abstracted from existing operators minus Infrastructure Cost Charge (ICC) payments to NR from the open-access operator, and ORR policy is to reject applications that generate less than £0.30 of new revenue for each £1 of net revenue loss to taxpayers.

ORR has forecast a generation:abstraction ratio of 0.44:1 for the new Grand Union service. It has calculated that it will generate revenue of £7.7m while abstracting £20.4m a year predominantly from GWR.

After ICC payments of £2.8m to NR in the reference year of 2029-30 this gives net abstraction of £17.6m a year or a ratio of 0.44:1. “Our forecast is sufficiently above the threshold for us to conclude that - on the basis of the available evidence and our assessment - the application passes the NPA test,” ORR says.

“The added competition should also make a significant contribution to innovation in terms of the routes served, ticketing practices and service quality improvements, by both Grand Union and through the response of existing operators.”