THE first Alstom Citadis 305 LRV for Kaohsiung left Alstom’s plant in La Rochelle, France, on July 25 on the initial leg of its journey to Taiwan. 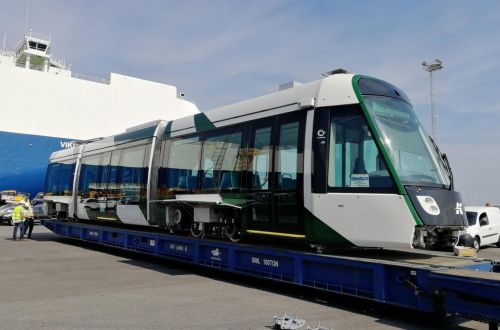 The vehicle was shipped from the Belgian port of Antwerp on August 3 and is due to arrive at the port of Keelung in the north of Taiwan early next month. From there, it will be moved by road across the island to Kaohsiung.

The five-section bidirectional LRVs are equipped with permanent magnet motors and Alstom’s Citadis Ecopack onboard storage system for catenary-free operation, which draws current from the catenary via the pantograph in a 20-second charging cycle during stops at stations.

Kaohsiung Mass Rapid Transit says Stage 2 was 38% complete at the end of July. Installation of electromechanical systems has been completed on the section from the Stage 1 terminus at Hamasen to Singlong Road, with testing expected to begin on this stretch in September.