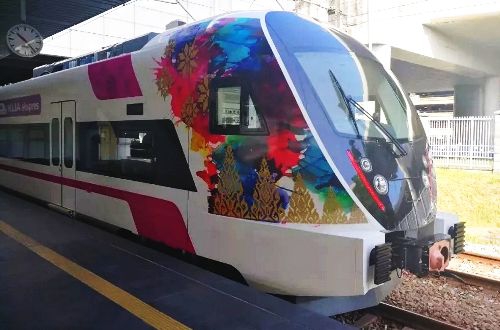 The introduction of new rolling enabled ERL to step up peak services from March 14.

Two of the six trains will be used for Klia Ekspres, and four for Klia Transit stopping services. The final set was delivered to Malaysia last month and ERL says commissioning and testing has been completed for one Klia Ekspres trains and two Klia Transit sets.

Each Klia Ekspres set seats 192 passengers while the Klia Transit trains accommodate up to 350 passengers, 144 of them seated.

The 25kV 50Hz ac sets have a maximum speed of 160km/h with onboard features including infotainment systems, Wi-Fi, wheelchair compartments, and baggage racks. ERL says the trains have 15% more air-conditioning capacity than the ET425M sets as well as higher ceilings, improved seat pitch, and an enhanced CCTV system.

The CRRC trains have two compressors, compared to one on the Siemens trains, and more powerful traction motors. ERL also anticipates a 30% improvement in overhaul cycles compared with the older trains.