VIAMOBILIDADE, a consortium of Brazil’s CCR Group and RuasInvest Participações, has won a concession to run São Paulo monorail Line 15 (Silver Line) after submitting the only bid at an auction on March 11. 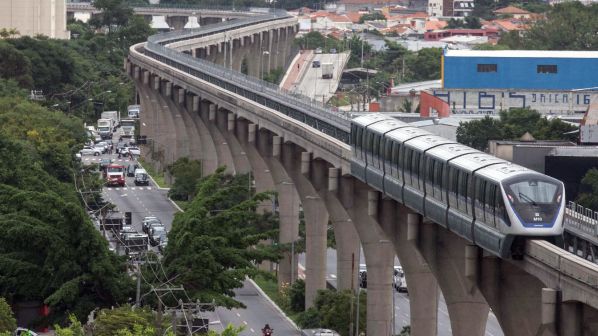 The concession to operate and maintain the line, which is currently managed by São Paulo Metro, has an estimated value of Reais 4.7bn ($US 1.2bn) over the 20-year term of the agreement. This encompasses income from the annual operating fee as well as non-operating revenues such as leasing of commercial space in stations.

ViaMobilidade is expected to invest Reais 345m in Line 15 over the duration of the concession.

The initial 2.9km section of Line 15 between an interchange with metro Line 2 (Green Line) at Vila Prudente and Oratório opened in August 2014. Services were extended 5.5km east from Oratório to Vila União in April 2018.

Metropolitan transport secretary, Mr Alexandre Baldy, says the next four-station section will open in December. The entire 15km line is due to be completed by the second half of 2021. Ridership is forecast to reach 405,000 passengers a day when the line is fully operational.

The state of São Paulo has invested Reais 5.2bn in rolling stock and infrastructure and these assets are not included in the concession.

Services on Line 15 are operated by a fleet of 54 seven-car Bombardier Innovia monorail trains equipped with the Cityflo 650 train control system.