The CEE has travelled through 26 countries since leaving Lisbon on September 2. 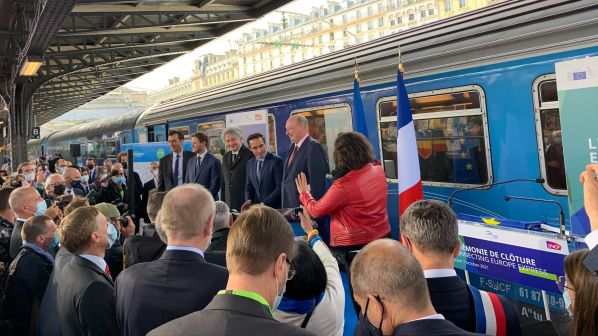 THE Connecting Europe Express (CEE) arrived in Paris on October 7 after completing a 20,000km journey across 26 countries over 36 days. The train, which left Lisbon on September 2, also crossed 33 borders and made more than 120 stops as it ran across Europe to promote the European Year of Rail, raising awareness of the benefits of rail and the challenges which still need to be overcome.

The train hosted several conferences and welcomed school classes, policymakers, stakeholders and other citizens on board for various stretches, with additional conferences and welcome events organised along the route. The arrival of the train also coincided with key events such as the informal meeting of transport and energy ministers in Brdo, Slovenia, the first-ever Western Balkans Rail Summit in Belgrade, and a demonstration of a digital automatic coupling (DAC) in Halle (Saale), Germany.

“The Connecting Europe Express has been a rolling laboratory, revealing in real-time the many achievements of our single European rail area and our TEN-T network to allow for seamless travel across our union,” says European commissioner for transport, Ms Adina Vălean. “I would like to extend my heartfelt gratitude to everyone who helped us turn the Connecting Europe Express from an idea into reality, a packed and exciting itinerary, memorable meetings - of minds and persons - and a true flag-bearer for European rail.”

CER said the final event in Paris on October 7 was an opportunity to present the initial conclusions drawn during the unique train journey. First, there is a requirement for cross-border, modern, high-quality rail infrastructure in order for rail to unleash its potential. There is a clear need for joint action to complete the Trans-European Transport Network (TEN-T), including the core network by 2030 and the comprehensive network by 2050. The European Commission (EC) will propose changes to the TEN-T regulation later this year and released a €7bn call for proposals under the Connecting Europe Facility (CEF) on September 16 for projects targeting new, upgraded and improved European transport infrastructure. The EU’s Recovery and Resilience Facility will also support the modernisation and interoperability of rail infrastructure and key projects such as the Lyon - Turin lines, the Brenner Base tunnel and Rail Baltica.

Existing infrastructure must also be better managed and capacity enhanced CER says, with digitalisation touted as means to achieve necessary improvement. The wider deployment of ERTMS will increase capacity, safety, reliability and punctuality, while research and innovation such as that undertaken by Shift2Rail and the new Europe’s Rail partnership also unlock more capacity.

Third, CER says greater pan-European coordination and common requirements are needed, and the single European rail area must be enhanced. For example, European train drivers should be able to accompany their trains across borders, just as pilots and truck lorry drivers can. The Fourth Railway Package must also be transposed quickly to eliminate other remaining obstacles created by national rules and establish an open and competitive European market for rail.

Finally, rail needs to become more attractive to encourage more people and companies to choose it as a preferred travel mode, with improved ticketing and options for planning travel across transport modes, along with cheaper fares. The EC will present an action plan to boost long-distance cross-border passenger rail services in December.

“The Connecting Europe Express has achieved two targets today,” says CER chair and OBB CEO, Mr Andreas Matthä. “Not only has it reached its final destination in Paris but, more importantly, it has highlighted the challenges in cross-border train services. If another important target, the Green Deal, is to be a success, it must become as easy to drive a train through Europe as it is to drive a truck. For this to be achieved, rail will need more capacity and new investments in infrastructure. Framework conditions must be adapted to create a level playing field between all modes of transport. I congratulate and thank everyone involved in this highly successful project.”