Record first half ridership for DB

GERMAN Rail (DB) published its financial results for the first half of 2014 on July 24, revealing that ridership on its trains in Germany increased by 10 million year-on-year to just over 1 billion passengers. 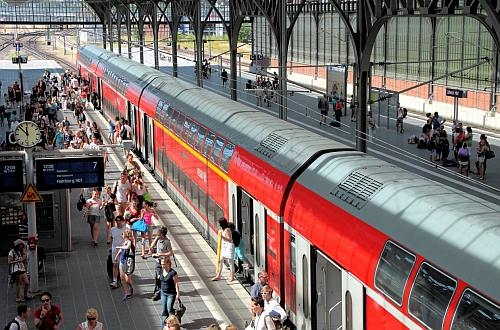 However, despite the increase in passenger numbers the distance travelled declined slightly, falling 0.4% to 42.9 billion passenger-km. Punctuality on passenger services increased to 95.6%, its highest level for several years.

DB's railfreight unit DB Schenker Rail also continued to recover from the economic crisis with volumes rising by 0.9% to 489 million tonne-km. DB says all business units in the logistics sector experienced considerable growth during the first half of 2014.

Traffic on the mainline network increased by 1.1% to 517 million train-path km in the first half, with non-DB operators accounting for 24.6% of this figure.

"We are in a better position after the first half of the year than expected," says DB CFO Dr Richard Lutz. "But there is no reason for us to be euphoric. We are still facing many challenges. Increasingly intense competition in our markets, infrastructure funding in Germany, and the collective bargaining negotiations currently in progress remain key concerns for us and for our future economic success."