FRENCH National Railways (SNCF) will introduce on December 1 a new online compensation scheme for passengers whose journeys on TGV or inter-city services are delayed by 30 minutes or more. 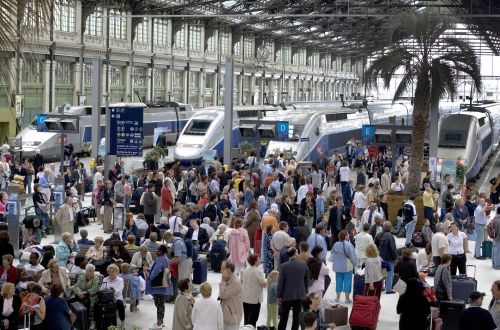 SNCF says the new scheme will be more generous than that demanded by European Union regulations. SNCF will offer coupons worth 25% of the ticket price for trains delayed by 30 minutes whereas the EU regulation calls for compensation to start when trains are delayed by one hour. SNCF and EU compensation increases to 50% for delays in excess of two hours, but SNCF’s compensation rises to 75% for delays exceeding three hours.

SNCF will also compensate passengers for all types of delays including those beyond its control, such as bad weather, suspect packages, vandalism, and obstacles on the track, which it says currently account for one-third of train delays.

Passengers can claim for compensation via a special website or the SNCF app and will receive a digital coupon valid for up to a year within 48 hours of applying.

TGV services have a punctuality record of 89.8% so far this year compared with 88.7% for inter-city trains. SNCF defines a TGV as being on time if it arrives at its destination within 5 minutes of schedule.

SNCF says an increase in investment in infrastructure and rolling stock has given it the confidence to offer the 30-minute punctuality guarantee. It says it will have renewed 6000km of its 29,600km network by the end of 2016, and is investing €1.2bn in the purchase of new trains, plus €150m each year in train refurbishment.

SNCF now has four operating centres supervising the movement of 300,000 passengers a day which communicate travel information to train and station staff.