ETIHAD Rail, the developer and operator of the UAE's national railway network, has officially handed over the operations control centre in Mirfa to Etihad Rail DB, a joint venture between Etihad Rail and DB Schenker. 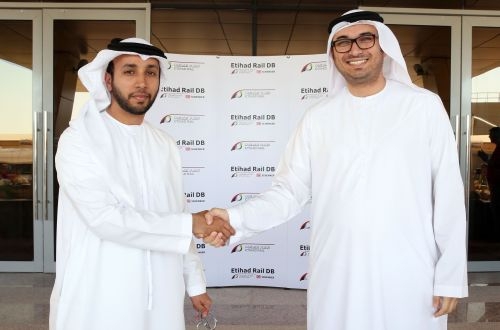 Construction of stage one of Etihad Rail's network, the 254km route from Shah to Habshan and Ruwais, is complete and trains are running on the line on a trial basis. The line is expected to carry 7 million tonnes of granulated sulphur for the Abu Dhabi National Oil Company every year, establishing the UAE as the world's largest exporter of sulphur.

Etihad Rail DB will manage the operation and maintenance of this stage of the railway network under a contract signed in March 2014.

"The OCC is at the core of the railway network," said Etihad Rail acting CEO Mr Faris Saif Al Mazrouei during the handover ceremony. "The qualified staff members working in the OCC are responsible for the overall control and command of the system including all train movements and this move is an important step forward for the project."

"Knowledge transfer is a key priority in our Emiratisation strategy and we will ensure the OCC becomes a training centre and pave the way for Emiratis to become the UAE's leading railway professionals."