PROPOSALS for the expansion of commuter rail and light rail networks in southern California have been revealed as part of San Diego Association of Governments' (Sandag) draft 35-year regional plan, which was released for public consultation on April 24. 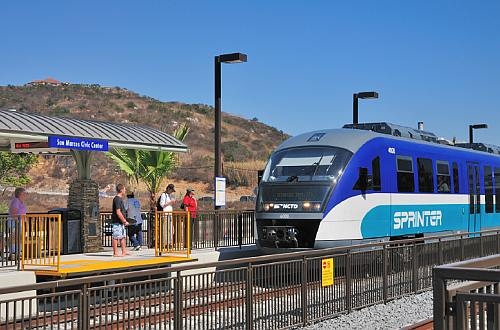 San Diego Forward incorporates the regional transport plan, sustainable communities strategy and regional comprehensive plan in a single blueprint.
The strategy assumes that the city cannot continue to sprawl and more compact communities are expected to emerge where housing, jobs and services are closer to one another, with residents being given more choice in where they live and how they travel.
More than $US 200bn will be invested in the transport network over the next 35 years with the aim of providing more transit services and expanding the network.
A primary focus will be the city's successful light rail network, which has grown rapidly in recent years. The next addition is the 17.7km Mid-Coast Corridor, which will extend the system north from Old Town along the Interstate 5 corridor to La Jolla and University City. The project was approved by Sandag last November and preliminary works will begin later this year with commissioning scheduled for 2019.
Four further light rail lines are included the regional plan. These include:

The plan envisages upgrading the San Diego – Los Angeles – San Luis Obispo line, the second-busiest passenger rail corridor in the United States and the San Diego region's main freight artery, with additional capacity and improved stations.
Expansion of the Oceanside – Escondido Sprinter commuter rail line is also proposed, with track-doubling and construction of an extension south from Escondido to Westfield North County.
Funding for these projects will come from various local, state, and federal sources and the strategy envisages around $US 204bn being made available for development of the region's transport network in the period to 2050. Sandag anticpates that 48% of this will be sourced locally with 34% coming from the state of California and 18% from the federal government.
The plan stresses that some additional funding sources, such as a "Quality of Life" regional sales tax would be required to implement the plan in full, but it assumes that none of these sources will be available before 2020.